Home Auto News Skoda Kodiaq Vs Ford Endeavour Vs Volkswagen Tiguan: One Of These Is India’s Best Suv

Skoda Kodiaq Vs Ford Endeavour vs Volkswagen Tiguan: One of these is India’s best SUV

Does the Skoda Kodiaq have what it takes to compete with other luxury SUVs like Ford Endeavour and Volkswagen Tiguan?
By : Autocar
| Updated on: 16 Dec 2017, 08:57 AM 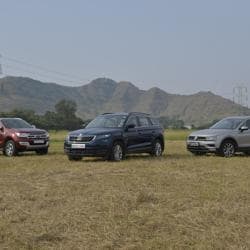 Between Ford Endeavour, Skoda Kodiaq and Volkswagen Tiguan, we try to find out which SUV offers the perfect balance of luxury and off-road skills.

Skoda, predominantly known for its comfy and large sedans, launched a new SUV after a long time. It's got all the right ingredients with four-wheel drive, seven seats and a diesel engine. Priced at ₹36 lakh (ex-showroom, Delhi), its closest competition is, err, pretty far. One of them is the hardcore frame-based Ford Endeavour, which has time and again established itself as the current segment-best. It's big, comfy and has an elaborate skill set when it comes to tackling rough stuff. The Kodiaq's other competitor is its cousin from Volkswagen, the monocoque-bodied Tiguan, which may not be comparable in size and off-road prowess, but has enough space and practicality on the inside with compact dimensions on the outside. Our not-so-easy job here is to narrow it down to one, and for that, we find out which SUV offers the perfect balance of luxury and off-road skills in a sort of 80:20 ratio.

Get in the Kodiaq and it's apparent that Skoda has really put the 'luxury' in its first luxury SUV. The ambience of the cabin is plush and there is an expensive feel to everything. The dashboard has a simple but subtle layout and is dominated by the large touchscreen in the centre. As ever with Skoda, the seats are comfy and spacious enough for large-sized adults and cushioning too is on the right side of firm, so even long hours in the car won't be a problem.

In the back, getting in and out is a breeze as the seats are at a decent height. Once settled in, it is comfortable and the sense of space is excellent. The bright upholstery along with the brilliant panoramic sunroof, and ample legroom and headroom make the rear cabin experience all but unforgettable. The last row in the Kodiaq is best used by children, as space is limited. 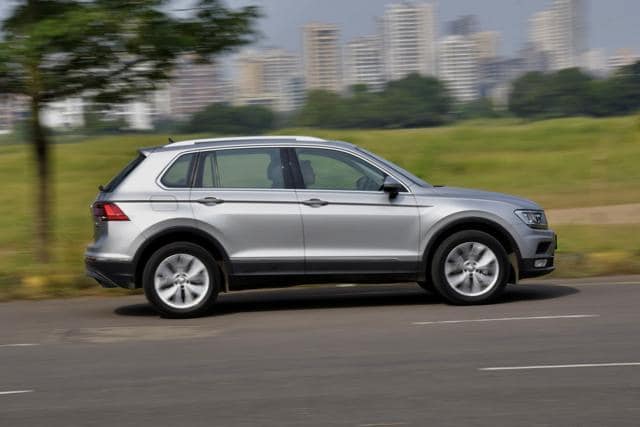 The layout of the VW Tiguan's cabin is clean and sharp. The attention to detail is impressive and like the Kodiaq, the buttons and knobs feel upmarket. The seats, however, are a tad firm and the bolstering for the thighs feels uncomfortable after a while. Also, the driving position is very car-like but without any compromise on outside visibility. In the back, there is a good amount of legroom and headroom, but even though there is a panoramic sunroof, the dark interiors rob the sense of space. Also, being a five-seater, the VW Tiguan misses out on that all-important third-row flexibility. 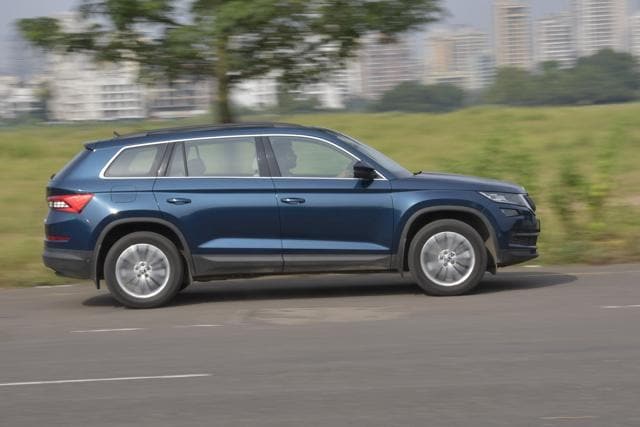 It's the interiors that add to the Endy's appeal. Yes, everything here is big - the touchscreen, the AC vents, the centre console and the panoramic sunroof. The quality of materials used is nearly as good as its European rivals, and that is saying something. The seats too are comfortable and well cushioned. In the back too there is plenty of legroom and space for three large adults. The windows do well to enhance the airiness of the cabin, and the third row, unlike in the Kodiaq, is a bit more practical and spacious. Still, doing long hours is not comfortable as there is a bit of space crunch.

All three cars are absolutely brimmed with equipment and safety is well taken care off too. 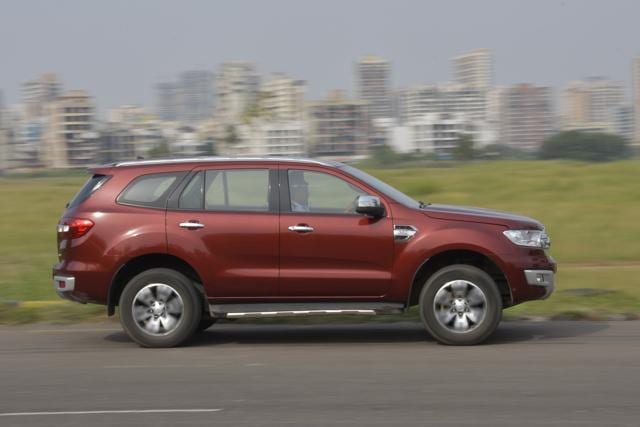 The Skoda Kodiaq is powered by a 2.0-litre diesel engine developing 150hp. For a seven-seater SUV with four-wheel drive, weighing 1,799kg, you'd think the power figure was only just about enough. But once behind the wheel, you would be surprised as the Kodiaq is quite quick off the line. The Kodiaq gets to 100kph from a standstill in just 10.62sec which is quite commendable. The seven-speed dual clutch gearbox is smooth and shifts seamlessly and should you want to take over the control, there are paddle shifters which are equally responsive. The engine refinement levels are excellent as well, especially at high speeds. Handling is another plus for the Kodiaq. This suspension also has been tuned to offer the best balance between comfort and manoeuvrability. The low-speed ride is a bit thumpy and crashy, but the Kodiaq absorbs most bumps and potholes quite well. The ride at highway speeds is flat and consistent with almost no pitching and bobbing.

The VW Tiguan is quite similar in comparison. The 2.0-litre turbo diesel engine makes 143hp and is also mated to a seven-speed dual clutch gearbox. The performance too is similar and just marginally short of the Kodiaq with a 0-100kph time of 10.55sec. What the Tiguan has going for it, however, is the lack of bulk. The five-seater layout means the VW is significantly lighter on its feet and that translates into better driving dynamics. The engine feels much more responsive with sharper throttle inputs and the smooth, quick-shifting gearbox. Refinement levels are quite similar as well.

Also, like the Kodiaq, the Tiguan gets VW's 4MOTION all-wheel-drive system. Now, although the ground clearance isn't suitable for off-roading, the AWD certainly helps it on wet roads, and through mud or slushy paths. Comfort is what the Tiguan does well too. Yes, you will encounter similar thuds and bumps like in the Kodiaq at low speeds, thanks to the similar firm suspension setup, but once up to speeds, it really is impressive and well contained. 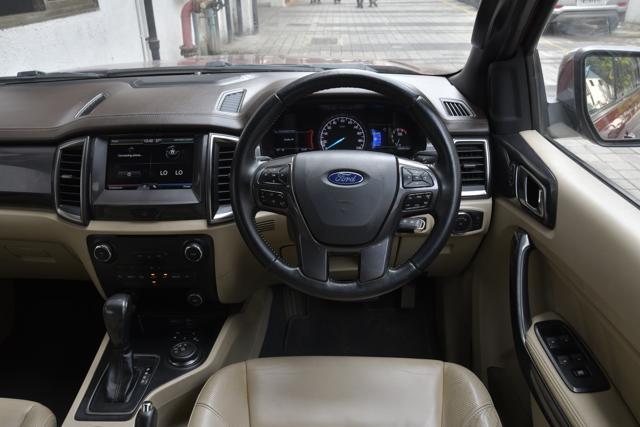 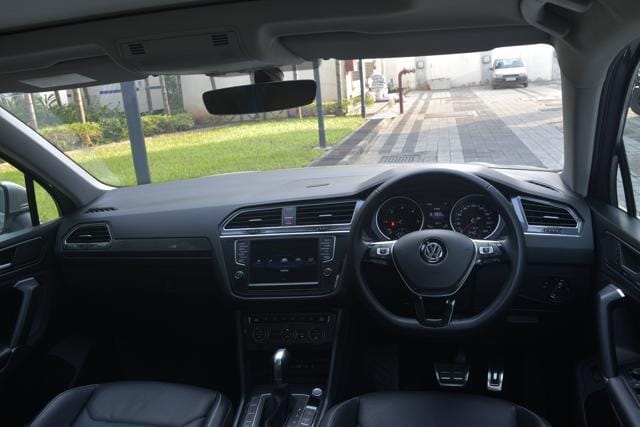 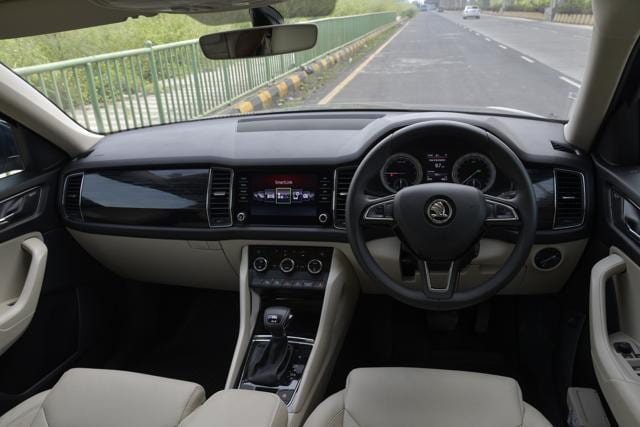 The Ford Endeavour is the most powerful here with a 3.2-litre, five-cylinder turbo-diesel engine under the large bonnet. It makes a healthy 200hp and has a very impressive 0-100kph time of just 11.22sec, which if you consider the fact that it weighs 2.3 tonnes, will give you a better idea of just how much grunt the engine has. The refinement levels are not as good as the VW and Skoda, and you do hear a fair bit of engine noise even when you're ambling about in the city. Press on and the sound only gets loud and boomy. Also, the six-speed gearbox is slow to respond and dulls the experience a fair bit.The strongest advantage it has here, however, is the high ground clearance, a proper low-range gearbox and the multiple off-road modes. In fact, the Endeavour has features and functionality that's on par with very expensive luxury SUVs. The suspension is the most supple of the three models.

The VW Tiguan is clearly the best value here, the one you should go for if you are firm on a budget. But its compact dimensions, dull-looking interiors, low ground clearance and lack of off-roader stance mean it just can't play with the big boys. And then there's no third row of seats. The Ford Endeavour is a bit rough around the edges when compared to the other two, but its well-built interiors and comfy cabin come as a pleasant surprise. It is well equipped, has a strong engine and even drives well. The ride is a bit unsettled, the big diesel sounds truck-like at higher engine speeds and it is big, heavy and unwieldy compared to the car-based competition.

The Skoda Kodiaq is better built on the inside, almost as spacious, several times more refined, and lighter and easier to drive. It is lavishly equipped, exudes a genuine luxury-car vibe and offers the best blend of off-road skills and on-road driving manners. It is ₹3.1 lakh dearer and needs a bit more power, but in the final scheme of things, the Skoda is so good, it just doesn't matter. Remember to buy the extended warranty and the service pack though. With Skoda's less-than-perfect track record, you may need it.