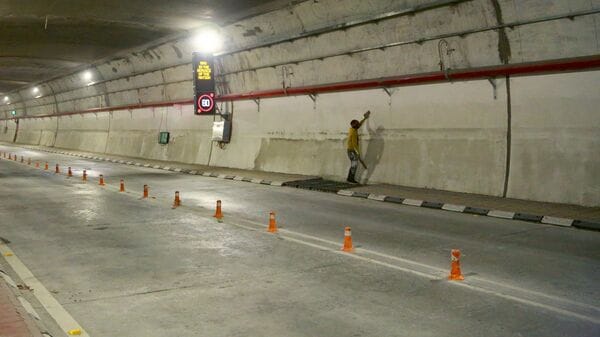 File photo of a tunnel used for representational purpose only

Road Transport and Highways minister Nitin Gadkari has said that the six-lane tunnel on Pune-Satara highway is being constructed at an estimated cost of ₹926 crore. It is expected to be completed by March 2023. The new tunnel will be located on the Khambatki Ghat on National Highway-4, and will be constructed as a twin tunnel with three lanes each.

The minister added that the existing 'S' curve in Satara-Pune direction will be completed soon and will lead to a significant reduction in accident risks. At present, the average travel time at Pune-Satara and Satara-Pune stretch through Khambataki Ghat is 45 minutes and 10-15 minutes, respectively. However, with the completion of this tunnel, average travel time will be reduced to 5-10 minutes. Further, the tunnel will enhance connectivity and help commuters save time and cost.

Recently, Gadkari had also shared images of new 187-km-long, four-lane Goa-Karnataka highway that has the Arabian sea coast on its one side and the Western Ghats on the other side. The highway passes through various terrains with 45-kilometre of the length passing through rolling terrain and 24-kilometre through mountainous terrain.

Calling the highway coast magnificent due to its scenic view, Gadkari said that it is an important coastal highway link between west and south India. The coastal highway connects major cities and towns along the way including places such as Panvel, Chiplun, Karwar, Udupi, Surathkal, Ratnagiri, Panaji, Margao, Mangalore, Kozhikode, Kochi, Thiruvananthapuram, and Kanyakumari.

Currently, 92.42% of the total work of the highway has been completed and the remaining project is expected to be completed by the end of this year. However, traffic is already open on the highway. The highway will "reduce travel time, prevent accidents, optimize vehicle operating costs and help in fuel savings due to smoother road and reduce congestion for inter and intra state commuters", the minister said.