Home Auto Scramblers On A Streak For 2015

Scramblers on a streak for 2015 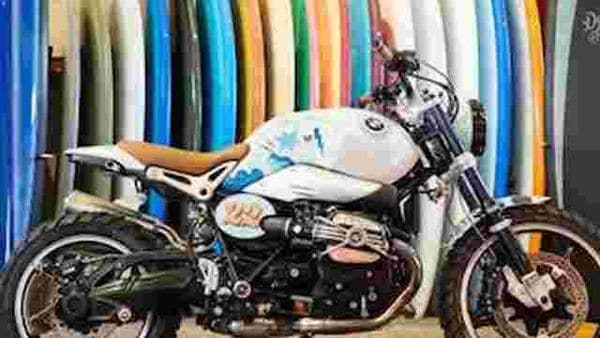 Reports linking BMW's biking arm to a new scrambler have been coming thick and fast over the course of the year. Ever since Ducati wowed the crowds at the Milan bike show last November with its perfectly retro-referenced Scrambler, it's been looking more and more likely that BMW was set to follow suit.

And now it has -- sort of -- with the Concept Path 22. Unveiled at the Wheels & Waves Festival in Biarritz, the machine, which BMW stresses is merely a concept, is -- like all historical scramblers -- based on an existing motorbike. 'A scrambler is the perfect match for Wheels & Waves. It's the epitome of a motorcycle beyond established standards and conventions. Performance specifications are not so much of interest -- style and originality all the more so. Scramblers express passion and are as varied as their owners. The Concept Path 22 is our own interpretation based on the R nineT,' explains Edgar Heinrich, Head of BMW Motorrad Design.

A collaboration between BMW, artist Ornamental Conifer and surfboard developer Mason Dyer, the bike is stripped down to its essentials but keeps that two-cylinder boxer engine and shaft drive. It gets a circular headlamp, bespoke fuel tank and a smaller, single seat. The body's shorter than the standard R nineT for better maneuvrability in a tight spot and for the same reason the exhausts are raised. The finishing touch is the oversized knobbly tires wrapped around bigger wheels.

The bike is also daubed in artwork courtesy of Ornamental Conifer who has also worked on matching leather jackets, while Mason Dyer custom made two surfboards specifically for the Path 22 which slide into the bike's unique surfboard holder, which can be folded down or removed altogether when not in use.

The scrambler is perhaps as old as the motorcycle itself and although it has its roots in self customization, it wasn't long before bike firms took notice and built them as proper models or offered them as kits. In the 1950s and 60s it had become the epitome of two-wheel cool.

As bikes have become more technologically advanced, faster and more focused on horsepower, the scrambler has been consigned to the back roads and dirt tracks where it was born, with naked bikes, adventure bikes and custom cruisers becoming the rides of choice for a growing number of bikers around the world.

However, whether it's because riders want more individuality, or because more and more riders are rebelling against the technological revolution and want to get back to motorcycling basics, it looks as if the scrambler is going to be one of the defining models of 2015 and most probably beyond.

'The idea of a BMW scrambler is not new to us. Now seemed to be the right time to present our interpretation of this legendary vehicle concept,' says Ola Stenegard, Head of BMW Motorrad Vehicle Design. 'The BMW Concept Path 22 stands for freedom -- freedom of thought and its expression. There are no boundaries.'