The vehicle, which Zoox describes as a driverless carriage or robotaxi, can carry as many as four passengers.With a motor at each end, it travels in either direction and maxes out at 75 miles per hour.Two battery packs, one under each row of seats, generate enough juice for 16 hours of run time.
By :
| Updated on: 14 Dec 2020, 02:37 PM 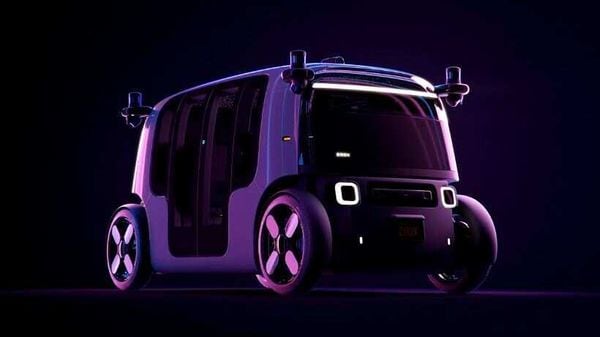 Zoox Inc., the self-driving startup owned by Amazon.com Inc., unveiled a fully autonomous electric vehicle with no steering wheel that can drive day and night on a single charge.

The vehicle, which Zoox describes as a driverless carriage or robotaxi, can carry as many as four passengers. With a motor at each end, it travels in either direction and maxes out at 75 miles per hour. Two battery packs, one under each row of seats, generate enough juice for 16 hours of run time before recharging, the company said. To commercialize the technology, Zoox plans to launch an app-based ride-hailing service in cities like San Francisco and Las Vegas.

“This is really about re-imagining transportation," Zoox Chief Executive Officer Aicha Evans said in an interview with Bloomberg Television. “Not only do we have the capital required, we have the long-term vision."

The company also plans to launch ride-hailing services in other countries, Evans said. Executives didn’t say how much rides would cost but that they would be “affordable" and competitive with services operated by Uber Technologies Inc. and Lyft Inc. Nor did they say when the service would launch but confirmed it wouldn’t happen in 2021. In a video released Monday, Evans used Zoox’s app to hail the vehicle outside San Francisco’s Fairmont hotel and took a spin around the block.

Acquired by Amazon in June for an undisclosed sum, Zoox is one of several companies racing to put fully autonomous vehicles on the road, an effort that’s taking longer than anticipated. Most are testing retrofitted conventional cars on public roads, and few are commercially deployed. In October, Alphabet Inc.’s self-driving unit Waymo started a fully driverless taxi service in suburban Phoenix. General Motors Co.-backed Cruise LLC is also testing autonomous cars -- recently without safety drivers -- in San Francisco, using a fleet of electric vehicles based on the Chevy Bolt.

Despite being years from deployment, several of Zoox’s quirky-looking mint-green vehicles are already being built at a facility in Fremont, California. The factory has the capacity to eventually produce 10,000 to 15,000 units annually, executives said. Suppliers send the major components -- the drive unit, body, battery pack and so on -- pre-assembled, and Zoox then does final assembly in stages, a process it likens to building a Lego set. Executives declined to reveal the battery supplier.

The unveiling of a production car marks a significant step for a company that has been working on an autonomous passenger vehicle since its founding in 2014. At times Zoox was “ridiculed" for what it was trying to do, Chief Technology Officer Jesse Levinson told Bloomberg TV.

“Unlike many of the concept cars other companies have shown in the last several years this vehicle has passed all the FMVSS crash tests," Levinson said, referring to tests required by U.S. regulators.

Zoox isn’t the first to unveil a fully autonomous passenger vehicle. GM’s Cruise showed off a battery-powered shuttle in January. Called the Origin, it also does away with many of the controls present in conventional cars: pedals, rearview mirrors, steering wheel. Cruise plans to commercialize the Origin through a ride-sharing service and says it’s cheaper to run than a conventional car.

Zoox’s vehicle is similar but smaller. On each corner a “sensor pod" houses a spinning laser sensor and other lidars and as well as cameras to help it navigate. A pair of front-facing cameras sit atop of the vehicle, with other less-visible sensors mounted on the sides. Each corner pod has a 270-degree field of vision, enabling the car to see more than 360 degrees of terrain at once.

The vehicle’s safety features include airbags that form a cocoon around each passenger in the event of a crash, which Zoox says is unlikely given its confidence in the technology. The company can manually operate the vehicles remotely and communicate with passengers in real time. For those worried about privacy, Zoox says passengers will have the option to blur images captured by the on-board camera.

When Amazon acquired Zoox, industry watchers speculated that the e-commerce giant eventually planned to deploy fleets of driverless delivery vehicles. In the interview, Evans said there are currently no plans to do so but acknowledged that “at some point we could move packages."