Home Auto News Royal Enfield Growth Slows Down Even Though Sales Up 17% At 60,113 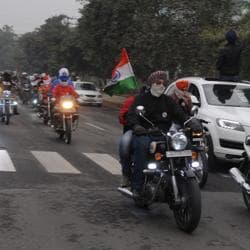 A group of Royal Enfield youth sikh has been organising Nation salute ride from New Delhi to Damdama lake on Republic Day, in Gurgaon, India, on Thursday, January 26, 2017.

Royal Enfield, the two-wheeler division of Eicher Motors, today reported a 17% jump in total sales at 60,113 units in March, slower than its traditional growth rate of around 30%.

The two-wheeler manufacturer had sold 51,320 units in March 2016, Eicher Motors said in a statement.