As many as seven luxury vehicles were seized as the owners were reportedly unable to furnish proper, valid and legal transfer documents.
By : HT Auto Desk
| Updated on: 24 Aug 2021, 11:31 AM 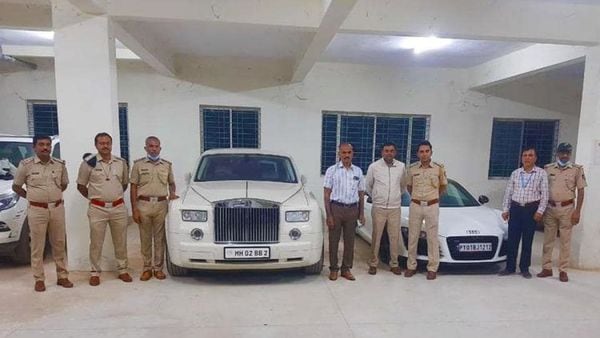 Some of the luxury vehicles seized by Karnataka transport department are seen here.

The Karnataka transport department seized seven luxury vehicles on Sunday. During the raid, cars manufactured by Rolls Royce, Jaguar, Audi, Range Rover, Porsche and Mercedes-Benz were taken custody of. These vehicles have been seized as the drivers failed to provide valid transfer documents.

Officials from the transport department conducted a special drive near the UB City Mall to seize these vehicles that are currently parked at the Road Transport Office in Nelamangala. Transport Commissioner N Shiva Kumar said that these luxury vehicles have been seized due to the absence of valid documents. “We don’t know who it belongs to. There are no documents available with them (drivers). That’s why the vehicles were seized," he was quoted as saying. He also informed that a few cars amongst the lot had registration numbers of Maharashtra and Puducherry. “These cars have not paid road tax in Karnataka and (this) amount(s) to a big loss to the state exchequer," he added.

The Rolls Royce, in particular, is under close scrutiny because it may have previously belonged to Bollywood actor Amitabh Bachchan. Additional transport commissioner (enforcement) Narendra Holkar informed that during the raid, when the driver was asked for documents, the person could not produce them but instead showed a letter signed by the actor stating that the vehicle was sold to the former. Holkar said that even Vahan, the government of India database, did not reflect any information related to the vehicle. “So, we have seized the vehicle to examine the claims made by the driver," he added.

According to media reports, a person called Babu - believed to be a Bengaluru-based builder - said that he had purchased the car from the actor for ₹6 crores in 2019, but the documents have not been transferred to his name. The authorities conveyed that till now only one car owner has come forward with the documents and that these are being examined. In case, these ‘invisible’ owners are unable to prove their ownership with valid documents, the transport department can auction these vehicles after getting necessary approvals from the court.