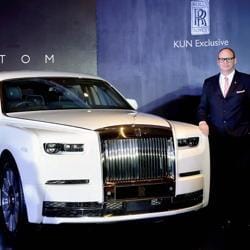 Rolls-Royce Asia Pacific Regional Director Paul Harris at the launch of 8th generation Phantom priced up to Rs 11.35 crore in Chennai on Thursday.

Luxury car maker Rolls-Royce today introduced the eighth generation Phantom priced at ₹9.50 crore, as part of plans to widen the product portfolio in the country. "We have a great partner (KUN Exclusive).. business is booming in South and Chennai is a big automotive hub from Indian perspective," Rolls-Royce Motor Cars, Asia Pacific, Regional Director, Paul Harris told reporter here to a query on choosing the city for the launch.

The Phantom VIII is equipped with 6.75 litre twin-turbocharged V12 engine that delivers 563hp and 900Nm of torque. It can reach 0-100km/hr in just 5.4 seconds. The new Phantom series is 30% lighter than its predecessors and has a laser light technology providing 600 metre range of light at night for enhanced safety. The Phantom Standard Wheelbase variant is priced at ₹9.50 crore while the Phantom Extended Wheelbase from ₹11.35 crore. The pricing also includes a four-year service package and regional warranty.

KUN Exclusive is the authorised Rolls-Royce Motor Cars dealer for Chennai and Hyderabad. Rolls-Royce Motor Cars have five outlets in the Southern region. To a question on the company's business performance last year, he said, India was bit of a strange market last year because of so many changes in "duties, GST and demonestisation."

"From the automotive perspective, definitely there was lack of stability last year. It has to stabilise somehow. You cannot keep tinkering a business area. It needs stability. Well mostly it is on various taxation issues, GST, demonetisation and many many things had an impact," he noted. "The car pricing involves 214% of import duty plus Goods and Service Tax. We have seen most changes in shortest period of time and that is definitely not good (for our business)," he said.

To another query on the product line up, he said, "Cullinan will be coming later this year. Then we have Phantom, and Ghost extendable base, Wreath and then Dawn. By the end of the year there will be five model launch plus BlackBadge."