Actress Priyanka Chopra can be seen sitting in the driver's seat with her hands on the steering wheel while flaunting her brand new ride.
By : HT Auto Desk
| Updated on: 22 May 2022, 12:02 PM 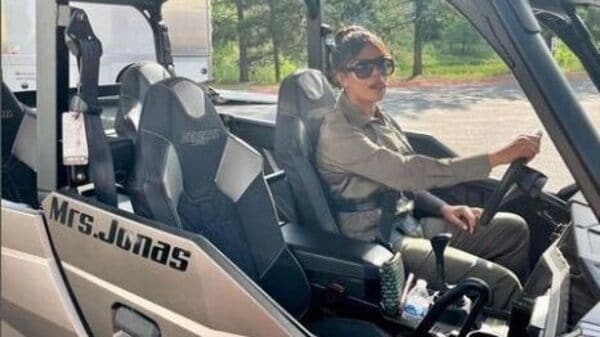 Actress Priyanka Chopra took to Instagram to flaunt her new customized ride gifted by husband Nick Jonas. Her brand new all terrain vehicle (ATV) features ‘Mrs. Jonas' written on the door, making it a personalized and exclusive ride. Priyanka can be seen sitting in the driver's seat with her hands on the steering wheel, beaming with joy while flaunting her brand new ride. The vehicle looks futuristic featuring a steel grey body paint and black roof.

Addressing Jonas as the best husband, the actress, in her Instagram post, wrote, “Now that’s a ride… thank you @nickjonas, always helping with my cool quotient #besthusbandever." He also used hashtags such as Citadel and set life. The hashtags suggest that Nick may have given her the car for her commute on the sets of her Amazon Prime Video series Citadel as the actress has been busy with the shoot of the sci-fi show. The upcoming show also stars Game of Thrones and Eternals star Richard Madden.

The custom ATV looks premium with captain seats covered in Black leatherette and ample legroom. The front row also has a storage box and cup holders between the driver and front passenger seats.

Priyanka's fans cheered on her new picture depicting her cool quotient. Many reacted to it with hearts and fire emojis. One fan commented, “This is so epic" while another wrote, “This is so cool! You look like you're having fun. Love it!"