The government is trying to set up multiple bio CNG manufacturing units in India. The petroleum ministry is making plans to buy bio-CNG, the Union Minister said.
By : PTI
| Updated on: 13 Feb 2021, 11:38 AM 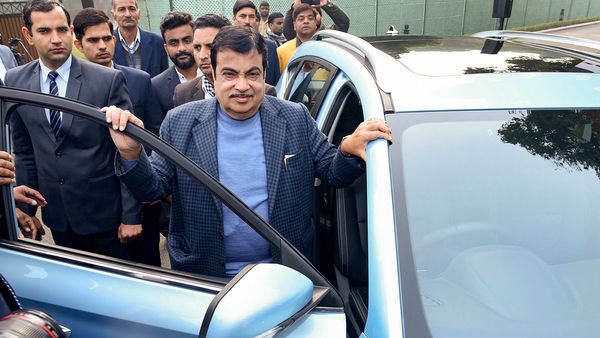 New Delhi: Union Transport Minister Nitin Gadkari said there is a potential for setting up at least 5,000 bio CNG manufacturing units in India.

Pitiching for promoting clean fuel in India, Union Minister Nitin Gadkari on Friday said there is a potential for setting up at least 5,000 bio CNG manufacturing units in India.

Launching India’s first-ever diesel tractor, converted to CNG and registered in his name, Road Transport, Highways and MSMEs Minister Nitin Gadkari also said that not only it will change the rural economy but result in huge employment creation.

"The government is trying to set up multiple bio CNG manufacturing units in India. The petroleum ministry is making plans to buy bio-CNG.

"There is huge employment opportunity in this area and it can bolster our economic development. The technology is proven. There is a potential of 5,000 bio CNG manufacturing units in India," the minister said.

He also said that instead of burning stubble, farmers in India can earn ₹1,500 crore per annum by selling these.

Their income can multiply manifold if they utilise the stubble in CNG-making, he said while addressing the launch event of India's first CNG tractor converted from diesel.

The minister also said a farmer could save on an average ₹1.5- ₹2 lakh on fuel costs by using CNG tractor.

"As high as 35 million tonne of stubble is burnt by the farmers in India from October to January every year. If this 35 MT stubble is purchased, farmers will get ₹2,000 per tonne income. Instead of burning stubbles, farmers of India can earn ₹1,500 crore from that," Gadkari said.

He added that the benefits will multiply if used in CNG making. Farmers will get benefits as their per-day cost for diesel tractor comes to ₹1,800, while CNG cost comes to barely ₹940.

The conversion has been carried out jointly by Rawmatt Techno Solutions & Tomasetto Achille India.

The minister said wide use of tractors by farmers will help them increase their incomes by lowering costs and help in creating job opportunities in rural India.

The minister said that apart from being a clean fuel, CNG is economical also as it has zero lead and is non-corrosive, non-dilutive and non-contaminating. It also helps in increasing the life of the engine, and requires less regular maintenance.

It is cheaper also as CNG prices are far more consistent than fluctuating petrol prices. Also, the average mileage of CNG vehicles is better than that of diesel/petrol driven vehicles, the minister said.

He said it is safer as CNG tanks come with a tight seal, which reduces the possibility of explosion while refuelling or in the event of a spill.

"It is the future as at present, around 12 million vehicles are already powered by natural gas throughout the world and more companies and municipalities are joining the CNG movement every day," he said.

"Overall, emissions are reduced by 70 per cent as compared to diesel. It will help farmers save up to 50 per cent on the fuel cost as the current diesel prices are Rs.77.43 per litre, whereas CNG is only ₹42 per kg," he said.

The minsiter said the government is considering to convert diesel buses into CNG buses and will encourage retrofitting of CNG kits.

He also said the ethanol economy, which is of ₹20,000 crore, will be taken to ₹2 lakh crore.

Petroleum Minister Dharmendra Pradhan said the country is likely to see huge investments for setting up about 5,000 compressed bio-gas (CBG) units across the country.

Farmer can make huge income by converting CBG into ethanol, he said.