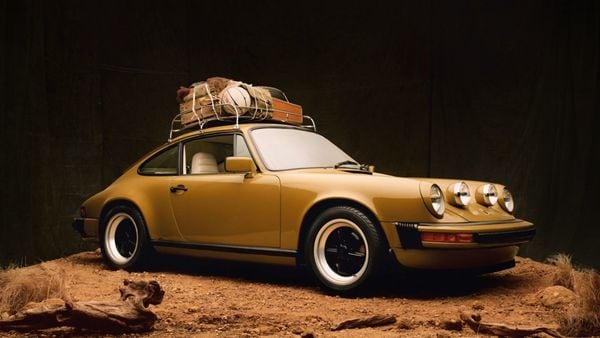 The Porsche 911 SC dawns the classic olive colour of the brand.

Magic happens when a luxury carmaker and fashion designer collaborate, but this alchemy may touch new heights if both come together to restore something from the past. Something of this sort happened when Porsche and Aimé Leon Dore (ALD), a New York fashion label teamed up to restore a 911 Super Carrera. Dawning the classic Porsche colour olive, this car was one of the significant models of the company which was manufactured from 1978 to 1983. During its time, about 58,000 units of this sports car were sold.

The founder and creative director of the label, Teddy Santis who played a major role in the restoration process, said that he took the inspiration from his childhood days on the Greek islands. The men’s fashion label that was founded in 2014 previously too collaborated with Porsche to restore the Type 964 911 Carrera 4 that was showcased in the New York Fashion Week in 2020. Santis appreciated the resourcefulness and the dedication of the Porsche team that was shown during the restoration process said the release.

(Also read: All-electric Porsche Macan heads out for road testing, to be launched in 2023)

This restored 911 SC has auxiliary lights on the bonnet, Fuchs wheels and a roof rack which gives it quite a retro look. The interior of the car has Persian carpet as its floor mats which are also integrated all the way up to the doors. The Recaro seats including the leather to the bouclé have been made by hand again. The vice president of marketing (CMO) at Porsche AG, Robert Ader said in the press release that this collaboration was a delight. The restored car will premiere in New York City from May 21 to May 23 at Porsche’s NYC flagship.