Home Auto News Petrol Price Just ₹2.43 Away From A Century In Mumbai

Petrol price just ₹2.43 away from a century in Mumbai

Petrol price in Mumbai is ₹97.57 per litre, while diesel is selling at ₹88.60 per litre.Premium petrol prices in several cities of Rajasthan, Madhya Pradesh and Maharashtra have crossed ₹100 per litre mark.
By : HT Auto Desk
| Updated on: 28 Feb 2021, 12:49 PM 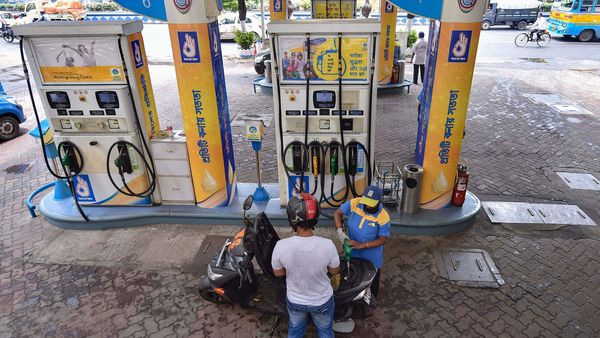 The oil marketing companies hit the pause button after raising the pump price of petrol and diesel by 24 paise and 15 paise respectively on Saturday. On Sunday, diesel prices too remained unchanged across India. In Delhi, Mumbai, Chennai and Kolkata, the most popular and widely sold fuel in India is priced at ₹81.47, ₹88.60, ₹86.45 and ₹84.35 per litre, respectively.

The petrol and diesel prices have been increasing continuously since February 9. The price hike rally has already taken the pump price above ₹100 per litre mark in several cities across countries. The premium petrol price crossed the ₹100 per litre mark in several cities of states like Rajasthan, Madhya Pradesh and Maharashtra. In the last one month, petrol became costlier by ₹4.87 and diesel by ₹4.99.

In the wake of this situation states like West Bengal, Assam, Meghalaya have already announced a cut in the state share of taxes. On the other hand, Rajasthan too announced a reduction in VAT. The final retail price of petrol and diesel include different taxes imposed by central and state governments and the dealer commission as well.

The current price hike is majorly attributed to the increase in crude oil prices in the international market, from where India imports around 85% of its total oil and natural gas requirement. However, the high taxation rate too is caused as a major reason behind this price hike of petrol and diesel. The auto fuel prices in India are increasing despite the fall in international crude oil prices. That’s because no relief measures have been provided by the central government.

The auto fuel price hike rally is unlikely to stop in the coming days as the oil company executives said that petrol and diesel prices may increase further as retail prices may have to be balanced in line with the global developments to prevent OMCs from loss on the sale of the fuels.