American stand-up comedian Kevin Hart is known to own most interesting cars and yet again, he drove home with a classic. Hart bought a stunning 1959 Chevrolet Corvette custom convertible for a massive sum of $825,000 (approx ₹6.05 crore). He got is hands on the restored classic at the Barrett-Jackson Scottsdale auction 2021 held in Arizona over the weekend.

The vintage Corvette isn't an ordinary restoration and has quite a lot of elements for turning heads. The gigantic EVOD one-off wheels wrapped in Nitto whitewall tyres give the Fanny Green-coloured car a royal look. Other customizations include Strange Engineering coilovers, Wilwood 6-piston brakes with 14-inch front rotors, custom independent rear suspension, and a fully-adjustable ride. 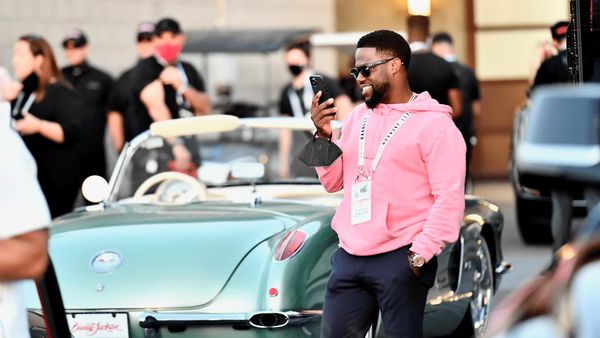 The most notable customization on the classic Chevy sports car is the engine under the hood – a new 6.2-liter V8 engine from a mid-engine C8 Corvette LT1. The engine sends 460 horsepower and 465 lb-ft of torque to the 4-speed 4L75e automatic transmission.

The one-of-a-kind custom convertible combines the timeless classic body of the Corvette with modern horsepower and conveniences. Apart from the exterior and mechanical upgrades, the cabin of the sports car has been treated to look equally appealing. The linen-coloured leather interior, new head unit resembling original 1959 Wonder Bar stereo, Bluetooth, speakers and a subwoofer make the cabin of the car delightful to be in.

In February, the celebrity car collector had acquired a beastly-looking 1970 Dodge Charger powered by a 1,000-horsepower Hellephant engine.

Other vehicles that were on display at the Barrett-Jackson Scottsdale auction included brand new Fords to a Cobra belonging to a famous maker. The auction also oversaw the selling of the first new Ford Bronco for over $1 million while the first GMC Hummer EV Edition 1 sold for $2.5 million.