The price of the new Land Rover Defender SUV begins at ₹69.99 lakh.The SUV was originally scheduled to be launched in June, but was delayed due to the coronavirus pandemic.
By : HT Auto Desk
| Updated on: 24 Sep 2020, 02:11 PM 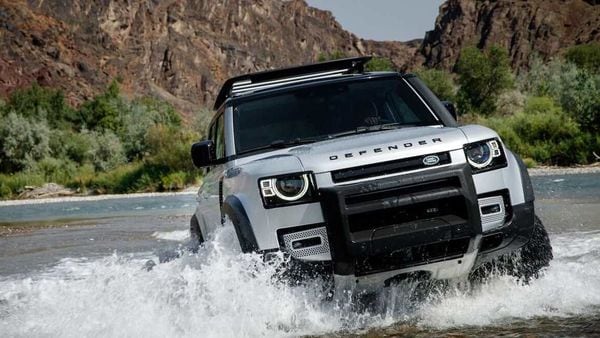 The Land rover Defender SUV, also known as the James Bond SUV for its role in the upcoming 007 movie, No Time To Die, was first showcased in September last year at the Frankfurt Motor Show. Jaguar announced the price of the SUV in India back in February this year. The launch of the Land Rover Defender in India was scheduled in June. However, the launch plans were shelved due to coronavirus pandemic.

The new Land Rover Defender makes a solid case for itself as the preferred vehicle in tough conditions. Powered by a 2.0-litre petrol engine, the Defender now belts out 300 Ps of power and has maximum torque of 400 Nm. It has been made available in two different body styles - 90 (3 door) and 110 (5 door), and will be brought in via the CBU route (Completely Built Unit).

The new Defender will be introduced in India for the first time since Land Rover entered the country in 2009. The new SUV is a modern 4x4 that traces its lineage of over 70 years back to the original Land Rover. "It will also be a significant milestone for the overall auto industry in India to witness the launch of a vehicle which enjoys legendary cult status across the globe," says Rohit Suri, President & Managing Director, Jaguar Land Rover India Ltd.