The NASA Perseverance rover has landed on Mars' Jezero Crater after travelling a distance of around 300 million miles in nearly seven months.Nicknamed Percy, the rover's primary task is to collect rock samples from the planet to evaluate the existence of life there.
By : HT Auto Desk
| Updated on: 19 Feb 2021, 10:19 AM 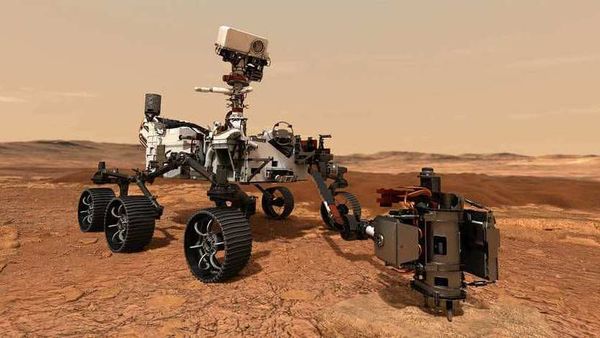 National Aeronautics and Space Administration's (NASA) fourth Mars rover - the Perseverance, has safely landed on Mars after accomplishing the riskiest final step yet in the epic mission.

The rover had started its journey from the Earth's surface in July and the final journey towards the surface of Mars was supposed to be the riskiest. NASA had earlier said that when the Perseverance lands on Mars, it will witness seven minutes of terror as it will go from 12,000 mph to a complete halt. The rover landed on Mars' Jezero Crater - an unexplored terrain that has a delta full of pits, cliffs and rocks dating back more than 3 billion years.

Upon landing, the rover sent two grainy, black-and-white photos of Mars’ pockmarked, pimply-looking surface, with its own shadow visible in the frame of one picture.

Perseverance's landing on Mars marks the third visit to the planet in just over a week. On successive days last week, two spacecrafts from United Arab Emirates and China also landed on Mars' surface. All of these three travelled around 300 million miles in nearly seven months. Perseverance also became the ninth spacecraft to successfully land on Mars since the 1970s.

The Perseverance has been primarily tasked with hunting for signs of ancient microbial life on the red planet and return samples to Earth by around 2031. Over the next two years, it will use its 7-foot-long arm to drill down and collect rock samples and seal them in its dozens of super-sterilized titanium tubes.

To help it in its mission, the rover has been equipped with 25 cameras, a pair of microphones, drills and lasers as well as a small helicopter called Ingenuity. The car-sized rover with six wheels is NASA's largest and heaviest Mars rover yet. It weighs 2,260 pounds (1,025 kilograms), is 10-feet long and has a top speed of just under 0.1-miles per hour.