The smart LED lights on the MINI Electric car can be app-controlled and come with customisable animations, that give the car a magical effect.
By : HT Auto Desk
| Updated on: 23 Nov 2021, 10:19 AM 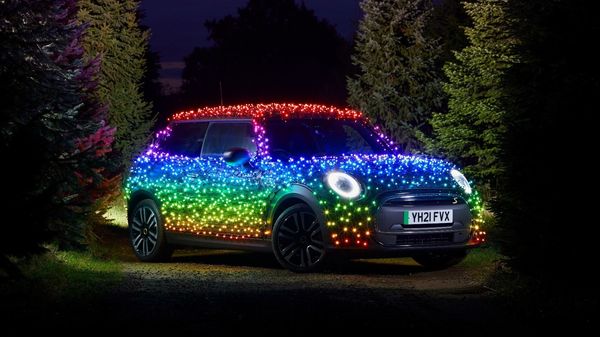 A MINI Electric has been wrapped in 2,000 smart LED lights to spread festive cheer as it will embark on a five-week tour around the UK to raise money for three charities - the MS Trust, Duchenne UK and Alzheimer’s Society. The electric MINI wears colourful lights including red, blue, green and yellow.

The lights wrapped around the vehicle can be app-controlled and come with customisable animations, that give the car a magical effect.

The vehicle will start its tour on November 25, and will be driven around the UK by project creator Nicholas ‘Nico’ Martin who first took the initiative to hand-wrap his MINI in LED lights three years ago. In December 2020, he realized that his colourful MINI could be used to bring joy and positivity to people while also raising money for charities that are important to him.

This year, Nico sought support MINI UK, Festive Lights and Italian smart lighting company Twinkly, to increase the voltage on his project and make it bigger and better than ever. “I’m so pleased to be back with the Festive MINI charity tour. I just knew last year I had an opportunity to cheer people up and also to raise funds for charities," he said.

The MINI electric car, called the MINI SE in the US, comes with a front-mounted electric motor making 181 horsepower (135 kilowatts) and 199 pound-feet (270 Newton-meters) of torque. It sources power from a 32.6-kilowatt-hour battery that provides an EPA-estimated range of 110 miles or 177 kilometers. The car can accelerate from zero to around 96 kilometers per hour in 6.9 seconds and has a top speed of 93 mph or 150 kph.