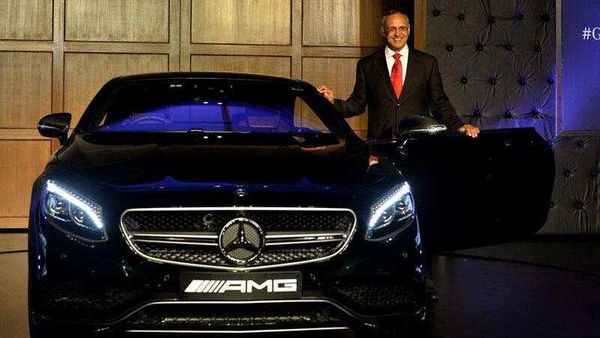 'The fully customized S-Class Coupe is priced at ₹ 2 crore, the top end AMG S 63 Coupe at ₹2.60 crore and the AMG G63 'Crazy Colour' edition at ₹ 2.17 crore (all prices ex-showroom Delhi),' the company said in a statement.

Mercedes-Benz India Managing Director & CEO Eberhard Kern said: 'It is never before that Mercedes-Benz has launched three exclusive luxury cars in a day. These three supremely exclusive cars live up to our claim of 'Best or Nothing' in the most detailed and compelling fashion.'

He said the company will be targeting high net worth individuals in India with the new products and expand the top end segment of the luxury car market which is about a few hundred units a year.

The S500 Coupe and AMG S 63 Coupe feature optionally available unique headlamps with a total of 94 Swarovski crystals, while the AMG G 63 'Crazy Colours' will be available in solar beam, sunset beam and alien green for enhanced personalisation, the company said.

On 'designo' platform, Kern said: 'We have seen an increasing demand for exclusivity and customisation from our customers and the launch of the 'designo' range will further reinforce Mercedes-Benz's customer focused approach, transforming customer delight to the next level.'

Mercedes Benz plans to introduce 15 new products this year. It has now introduced nine in the Indian market so far.

The company had posted a 43 per cent sales growth in India at 3,093 units in the second quarter of 2015. During the quarter Mercedes-Benz sold 3,566 units, overtaking rival Audi, which sold 3,139 units.

In the remaining months of the year, the company will open 12 more dealerships to add to its 73 dealers in 39 cities, he added.