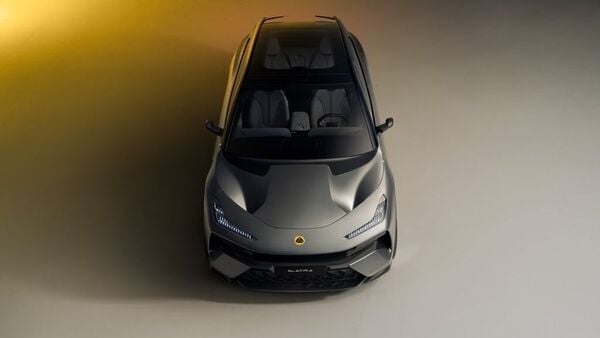 The all-electric Lotus Eletre is the manifestation of dreams for Lotus to take on the future with renewed confidence.

Lotus sports cars have never sold by the truckloads anywhere in the world and the British manufacturer has taken pride in being a rather exclusive and niche brand that has its products finding home among the rich and famous. But while being ultra premium has its perks and can get second and third glances, it may not make for impressive sales numbers and as such, Lotus is now planning moves that will help it sell around one lakh units each year by 2028.

The move towards electrification is likely to bolster the momentum and Lotus is positioning itself to make the most in a world gradually embracing electric vehicles (EVs). For a manufacturer that put out just 1,700 cars in 2021, the target figure of selling one lakh units will have to be powered considerably by EVs. Its fully-electric Eletre SUV has already been unveiled. There is also a fresh cash injection from Geely. The mood is upbeat but will concrete actions follow.

Much like most global automotive brands, Lotus may also bet big on the Chinese market to provide it with the opportunity to achieve its target. The Eletre for instance will be manufactured entirely in China, the world's largest automobile market. With a 100 kWh battery at its core, the Eletre claims to have a per-charge range of around 600 kms while producing a minimum of 592 hp and with a top speed of 257 kmph. But of course, the Lotus Eletre will be a premium offering with pricing expected to start from around $100,000 or approximately ₹78 lakh.

Will such a model be able to make a mark in the volumes game? The future is electric and Lotus has already drawn the curtains on models like Elise, Exige and Evora. Whether the strategy pays in getting sales volumes up is likely to remain up for debate.

(With inputs from CarScoops)