Lewis Hamilton finds a place on the podium for the first time since finishing third at season-opening F1 race in Bahrain back in March.
By : HT Auto Desk
| Updated on: 20 Jun 2022, 09:03 AM 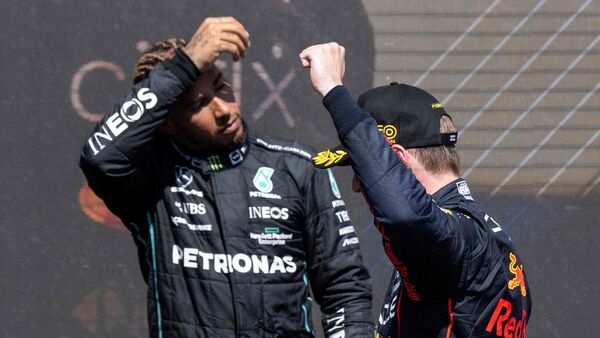 The ongoing Formula One season may not have been too kind to Lewis Hamilton but the seven-time world champion roared back alive at the Canadian Grand Prix on Sunday by securing the third place after starting the race from the fourth position. His smile was proof of the relief because the last time Hamilton was on the podium was when he finished third in the season-opening Bahrain Grand Prix in March. That arch-rival Max Verstappen once again won was just another detail.

Hamilton may well be accustomed to winning and finding himself at the podium but his 2022 Formula One season has been rather unimpressive thus far. He had even termed his car ‘undriveable’ while also telling reporters this weekend that the car was a ‘disaster’.

But this Sunday was something special.

Red Bull racer Verstappen had taken the pole position after qualifying on Saturday and was followed by Fernando Alonso in his Alpine and Ferrari's Carlos Sainz. Having won the Montral F1 race seven times - joint-record with Michael Schumacher, Hamilton was still a crowd favourite. During the course of the race, he did come under pressure from Kevin Magnussen in his Haas but not only did Hamilton manage to keep a hold on his fourth place but go past Alonso on the 25th lap after Alpine opted to push back a pit stop for the veteran Spaniard racer.

A mature drive was evident and Hamilton was quite a relived man at the end of it all. “It feels incredible today to be in amongst the battle," he said. "I was kind of just about keeping up with these guys, but they pulled away at the end. But it has given me and the team a lot of hope that there's more to come from this car. The potential is truly there if we get the set-up right."

Montreal was where a young Hamilton won his first Grand Prix way back in 2007 when he was driving for the McLaren F1 team. A third-place finish on Sunday may not appear as a fitting performance from one of the greatest racers ever but in the current context of the ongoing season, Hamilton will surely take it and hope for a fightback here on.