While world champion Aaron Durogati will paraglide across the Alpine region, Lamborghini Urus SUV will carry his support team to follow him throughout the RedBull X-Alps 2021 race.The SUV has also supported the paragliding champion during his preparations for the race.
By : HT Auto Desk
| Updated on: 21 Jun 2021, 02:46 PM Lamborghini Urus Super SUV has become ground support vehicle for the Italian two-time world paragliding champion Aaron Durogati for his sporting endeavor at the RedBull X-Alps 2021 race that started on June 20. The Urus SUV will transport the athlete and his support team through the mountainous terrains over 12 days of the race.

Urus is touted for having high load capacity and ability to travel over a wide range of terrains at any pace. While Durogati paraglides across the region, Urus will carry his support team to follow him throughout the race. The SUV has also supported the paragliding champion during his preparations for the race. The vehicle's sportiness, reliability and off-road capabilities were the reasons that it was chosen as Durogati's support vehicle.

The RedBull X-Alps event is one of the toughest and most adventurous races in the world. It will witness the participation of thirty-three selected athletes who will compete in ‘hike and fly’ race to cover the 1238 km through the Alpine course in the fastest time possible. The race will take place daily between 5 am and 10 pm until the last athlete completes the route, passing through twelve mandatory checkpoints across Austria, Germany, Switzerland, France and Italy, then back to Austria. All this while, the Urus will be counted upon. 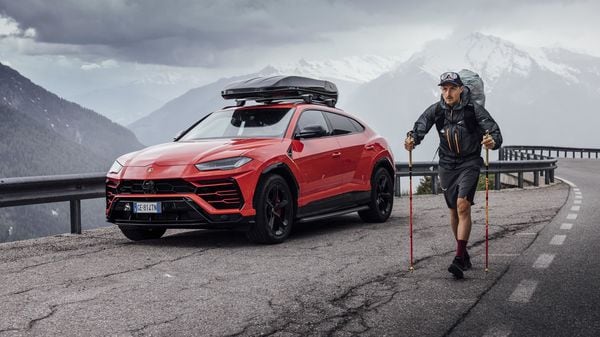 Lamborghini Urus as a support vehicle at the RedBull X-Alps 2021 race.

It comes equipped with a combination of four-wheel drive and four-wheel steering, adaptive air suspension, active anti-roll bars as well as ANIMA driving programs, making it fit as a support vehicle for the world champion.