Home Auto News Kia Telluride Facelift Suv Teased, Will Get Side By Side Screens

Kia will unveil its three-row SUV telluride at the New York International Auto Show.Kia Telluride SUV will be offered in the X-Pro variant.
By : HT Auto Desk
| Updated on: 08 Apr 2022, 11:39 AM 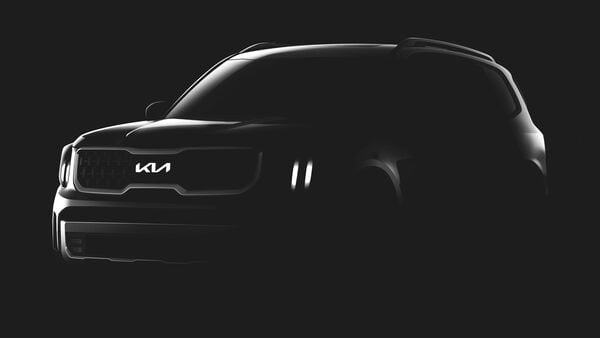 Kia is all set to bring in its new three-row SUV Telluride on April 13 at the New York International Auto Show. Kia Telluride promises space for seven to eight passengers inside with an all-wheel-drive system technology.

On the design front, the new Kia Telluride SUV will get a pair of redesigned headlights along with LED daytime running lights that consist of two vertical lines that run parallel. Kia shared that the new SUV will also be offered in the X-Pro variant.

The Kia Telluride will offer significant changes in the interior. The teaser image of the interior shows three central air vents. It is being guessed that the automaker might have incorporated some physical controls of the car in the new touchscreen infotainment system. Kia is yet to share any technical specifications of the upcoming SUV.

Kia will also bring its flagship electric SUV EV9 next year. The new Kia EV9 concept has already been showcased at the Los Angeles Auto Show last year. Though the battery capacity of the upcoming EV is not known, Kia has claimed that the EV9 electric SUV will offer a user a range of 540 km per charge. With fast-charging capability, the electric vehicle may be capable to add around 100 km to its range in around six minutes. It also has been reported that the Kia EV9 may high the speed of 100 kmph from zero in under six seconds.