If Tesla is auto industry's Apple, Volkswagen aims to be Samsung

Volkswagen expressed its desire to beat Tesla and grab the pole position to become the largest electric vehicle manufacturer in the world.
By : HT Auto Desk
| Written By : Mainak Das
| Updated on: 13 Apr 2021, 09:43 AM 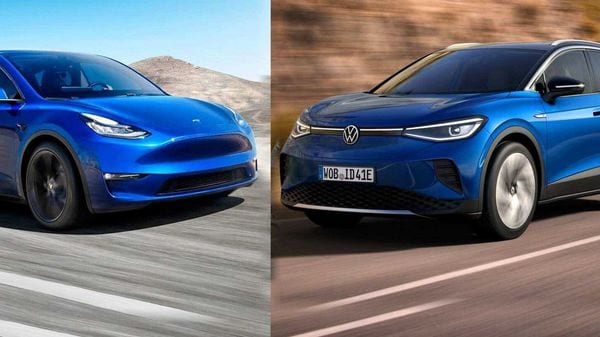 Electric vehicles are becoming more mainstream and several countries are pushing for electric mobility by setting a deadline for the internal combustion engine powered vehicles,

With the premiumness on offer and unique innovation first approach, electric vehicle maker Tesla has earned the respect of the auto industry and enthusiasts, similar to what Apple has earned in the world of smartphones. Now, Volkswagen, the German automobile giant that has operational presence in approximately 150 countries and operates 100 production facilities across 27 countries, is aiming to become the closest rival to Tesla, just like Samsung is to Apple.

For this, the German auto brand is heavily focusing on the electric mobility. Herbert Diess, CEO of Volkswagen Group on Monday has said that electric mobility has won the race and it is the only way to quickly eliminate mobility pollution.

The German company also expressed its desire to beat Tesla and grab the pole position to become the largest electric vehicle manufacturer in the world. VW is not only focusing on building electric vehicles, but developing charging infrastructure and creating a strong supply chain as well.

Considering the fact that batteries contribute to around 30% of the total cost of any electric vehicle and a majority of the EV batteries are produced by China, several automakers are trying to create a separate battery supply chain. Volkswagen too is one of them. For this, the automaker announced that it will be setting up six battery manufacturing plants across Europe by 2030, investing around $29 billion. VW would also invest in creating facilities for recycling the precious metals and improving battery design.

As electric vehicles are becoming more mainstream and several countries are pushing for electric mobility by setting a deadline for the internal combustion engine powered vehicles, the demand for zero-emission vehicles are increasing. Besides the conventional vehicle manufacturers several startups and technology firms too are working on the domain.

Hence, the analysts believe that just like there is a huge parallel Android smartphone system alongside the Apple, there will be the emergence of a non-Tesla electric vehicle ecosystem.

Interestingly, both Tesla and Volkswagen are on parallel roads when it comes to battery developments. VW has already invested in a Silicon Valley startup called QuantumScape Corporation, a Silicon Valley startup, for developing solid-state batteries that claimed to be up to 50% efficient and takes only around 15 minutes to be fully charged.

On the other hand, Tesla too has announced its plans in 2020, when it claimed that the cost of battery is expected to come down by 56% by an array of technological developments.