Reeling under the burden of steeply increasing petrol prices? Hyundai has released 4 diesel varients of Grand i10. A more spacious i10 with a diesel variant — sounds like a deadly combination, doesn’t it?
By : Hindustan Times
| Updated on: 04 Sep 2013, 02:37 AM

The Grand i10 is a notch up from the successful but now-outdated i10. i10's sales have tapered in the last two years to below 100,000 units annually as it was adversely impacted by the shift in consumer demand towards more fuel efficient and smaller diesel cars.

When it goes on sale globally later this year, the Grand i10 would replace the existing i10, but in India both cars would continue to coexist.
The car has been touted as the buffer between the current i10 and the i20 — both in terms of price and specifications. But what makes the hatchback an Indian buyer's delight? Its diesel variant.

The Grand i10 seemingly packs the punch that Hyundai has long needed to shake up the small car segment. It is available with a 1.2-litre Kappa petrol motor with higher tuning that develops 83 PS power and 116 NM torque. A 1.1-litre three-cylinder diesel variant — U2 — a derivative of the 4 cylinder 1.4 litre diesel motor that powers the more premium i20.

This motor belts out 71 PS power and 163 NM of torque. The diesel variant has come as a welcome announcement for those reeling under the burden of steeply increasing petrol prices. It has a rated fuel economy of 24 kmpl. The petrol variant delivers a fuel economy of 18.9 kmpl.

India's second largest car manufacturer, Hyundai Motor India Limited has evidently made the move to challenge the supremacy of Maruti Suzuki in the Indian car market.

The hatchback adopts the international 'fluidic' design that is also present in the small cars i20 and Eon and sedans Verna, Elantra and Sonata. However, the fluidic design is more understated here, possibly to differentiate it with the i20. Some of the features of the Grand i10 include rear air conditioning vents and 1 GB internal memory in the music system that does away with the need for a USB stick or compact disc. It also has push start ignition, a feature absent in the bestselling Maruti Swift.

A more spacious i10 with a diesel variant — sounds like a deadly combination, doesn't it? The only concern would be the car cannibalising stablemates i10 and i20, something Hyundai would try to avoid as much as possible. But if all goes as planned for the Korean auto giant, this combo could end up delivering the knockout punch to other hatchbacks in the country and grab the best-selling tag. 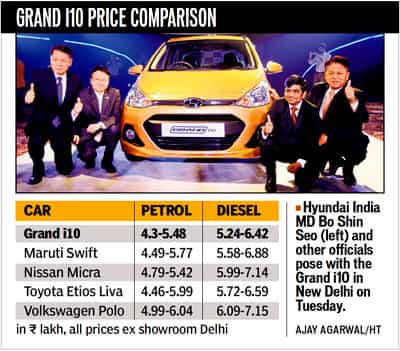