In a world of moon-shot technology, billion-dollar capital rounds and promises to disrupt private (and public) transportation as we know it, Gatik’s ambition is humble.
By :
| Updated on: 20 Jun 2020, 03:39 PM 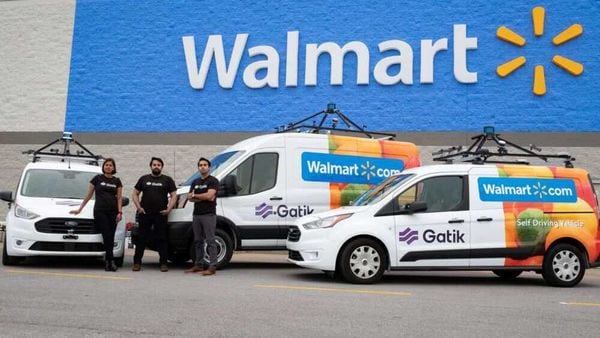 Gautam Narang, CEO and co-founder of self-driving startup Gatik, seen with his fleet in front of a Walmart store. (Photo courtesy: Gatik)

For a self-driving vehicle startup, Gatik has an odd mantra: don’t agonize over autonomy, worry about delivery. Specifically, the three-year-old company is focused on so-called middle-mile delivery, the oft-overlooked leg between when, say, a sweater is trucked across the country and when it is ferried over the last few miles and dropped on someone’s porch. For three years now, Gatik has been strapping sensors all over vans and small trucks and moving groceries from large distribution centres to small warehouses, albeit with a human back-up driver aboard.

In a world of moon-shot technology, billion-dollar capital rounds and promises to disrupt private (and public) transportation as we know it, Gatik’s ambition is humble. Last summer, it raised $4.5 million from investors, a pint-sized sum among self-driving ventures. Though Gatik may not be sexy, its slow-lane approach has proved to be pragmatic and lucrative. Last summer, Walmart signed on as one of its first customers.

It turns out grocery delivery wasn’t a bad place to be when the pandemic broke out. We caught up with CEO and co-founder Gautam Narang, an alum of Carnegie Mellon’s robotics program, to get a state-of-play on one of the smallest, savviest players in the critical space where transportation meets retail. (The interview was edited.)

Why focus on middle-mile?

It’s easier. We operate between fixed locations. We over-optimise the technology to focus on these routes. Some of the edge cases are reduced because we know the routes so intimately; we know the drive patterns. Because of all this, the go-to-market time is faster.

We use the full suite. We have Velodyne lidar—six lidars, six radars and 14 cameras.

Do your vehicles go on the interstate?

Some routes do involve highway driving, but our expertise is in complex urban areas. We do not do the literal last mile but we do similar driving. It’s the structured autonomy approach; we have the luxury of choosing these routes. One of the things we do is mostly right turns. When we use these constraints, we don’t have to worry about changing multiple lanes, we don’t have to solve for unpredicted left turns, which the whole industry is struggling with. We always say ‘We are solving the middle-mile problem, not really the autonomy problem.

How long do you spend developing a new route?

Right now, it’s four to six weeks. We drive around for two or three weeks and collect all the relevant data, and it’s all very specific to the route. We’re trying to cut that down by 50%.

So for every retailer, except maybe Amazon, this levels the playing field and changes the economics of e-commerce?

Well, I can’t comment on Amazon supply chain, but this is happening across the industry. The whole idea is let’s get close to the customer. Let’s shrink that delivery window.

Tell me about the Walmart deal.

Everything from the first meeting to the signing of the contract happened in a matter of months. They knew what their bottleneck was. We deployed at their headquarters in July last year. Our vehicles are running 7 days a week for them, 10 to 12 hours a day.

Who are you competing against?

In terms of dire competitors, there are none. No other company in the AV space is using box-truck architecture. Other companies are going after B-2-C and the long-haul. But if you’re going after general autonomy problems, you’re trying to boil the ocean. Level four autonomy is at least 4 to 5 years out and level 5—if it’s even possible—is at least 10 years out. With structured autonomy we can avoid schools, hospitals, fire stations, blind curves, etc. All of that is fair game. The timelines are very different, because we don’t really worry about the autonomy problem. We don’t care if unpredicted left turns are solved, for example.

Have you targeted logistics and shipping companies like UPS and FedEx?

We have received a lot of interest from non-retail customers, but for now we’ve decided to focus on the retailers, specifically on the online grocery application. Promising a 1-hour or 2-hour delivery window is not sustainable right now. They’re losing money on it and this is where Gatik comes in.

Walk me through your response to the pandemic.

Our original focus was making sure our operations were running smoothly. Since then, obviously we have seen a huge increase in number of orders. We saw a 30-35% spike in the number of orders and a number of inquiries. Our solution has become even more relevant; the key aspect is contactless delivery.

All of this is being driven by e-commerce and everything is built around end consumers’ expectations. You want deliveries now and at the cheapest possible price. In the old architecture you had the giant distribution centre and the deliveries used to happen once every 7 days, which isn’t fast enough. The expectations have forced the retailer to move closer to the customer and as you move closer the warehouse space shrinks. It’s a shift from hub-and-spoke to point-to-point and there’s been an explosion of routes.

Any interest from sectors you hadn’t thought about?

We saw a huge interest from medical and pharma distribution companies. Consumer electronics retail is something that we’ve seen a lot of interest from as well. Specifically, this is from inventory smoothing and inventory balancing. With Covid every company is rethinking their supply chain.

What’s your size and scale at the moment and are you profitable ?

Over 20 employees and we’re looking to double team size this year. We had a bit of a war-chest going into the Covid situation. Many companies in our space are scaling back, but we’re actively hiring. At a vehicle level, with one safety driver on board, we are profitable. Obviously, at the company level we are not profitable yet.

How long until you can take the humans out of the vehicle?

Right now, we are focusing on areas that have favourable conditions — sites that don’t have inclement weather. . …Definitely before a B-2-C delivery application or a robo-taxi application, because they are really trying to boil the ocean.

So when the safety driver comes off, does the price change or is it just extra margin?

It is extra margin, but once the driver comes off we’ll increase the operating time. The whole-asset utilisation piece when you don’t have a person on board, becomes more real. It becomes easier to handle multiple customers with one vehicle and do, for example, groceries during the day and pharmaceutical or consumer electronics at night. Some of those savings we can then extend to our customers as well.

Any concern that one of the leaders on autonomy will pivot to fill the middle-mile space?

We expect that frankly. We’ve always called this a no-brainer. But what will really help us is the kind of relationships we are building with our customers. We are doing a lot more than just the driving piece. At any given point, our vehicles are tracking everything and all of this data is very useful to the retail customers. These are some of the value-adds that our customers really need and this adds to the stickiness factor.