Car rental firm Hertz's board has decided it is in the company’s best interests to terminate the stock offering.The company now will look for other sources of funding, as per sources.
By : Bloomberg
| Updated on: 19 Jun 2020, 10:02 AM The bankrupt car renter’s board decided it was in the company’s best interests to terminate the offering, according to a Thursday regulatory filing. Hertz said on Wednesday that the stock sale had been suspended while it dealt with issues brought up by Securities and Exchange Commission officials.

“There is a reason this hasn’t been done before," said attorney Thomas J. Salerno, who represented owners of the Phoenix Coyotes hockey team when the NHL property was sold in bankruptcy. “How can you take sell stock and then take the position later that you can’t pay all your creditors? It’s either fraud in plain sight, or an admission that the company isn’t really insolvent."

Hertz now will look for other sources of funding, said people familiar with the matter, who asked not to be identified because the deliberations are private. Its likely course will be to get an expensive debtor-in-possession loan and sell off some of its cars, which could bring in more cash than once feared after a recovery in used-vehicle prices.

The SEC’s scrutiny foiled a share sale that already had been losing luster. Hertz’s stock price soared almost tenfold from its late-May low to close at $5.53 on June 8. The surge was improbable because equity investors usually are wiped out when a company goes bankrupt. By the time a judge signed off last week on Hertz’s plan to raise as much as $1 billion by selling shares, the stock already had given up much of those gains. A passenger wearing a protective mask passes in front of a counter of the car rental company Hertz at the almost empty Benito Juarez international airport, as the spread of the coronavirus disease continues in Mexico City, Mexico, June 11, 2020. (REUTERS)

Hertz shares resumed trading from an hours-long halt after the filing and closed down 10% to $1.80. Some of its most junior bonds tumbled on the news, with the unsecured notes due in 2024 plunging as much as 8 cents on the dollar, leaving holders with less than a third of their face value.

Any funds raised by the share sale could have brought in more money for creditors to split up. The cancellation makes it more likely that there won’t be enough to pay off everyone, and unsecured holders typically don’t get anything until the more senior lenders are made whole.

In turn, this increases the chances that shareholders, who stand near the back of the line, will be wiped out.

The cancellation also cuts into a potential payday for Jefferies LLC, which was managing the stock sale and had been promised a commission of up to 3%. Hertz didn’t say in its filing how many shares Jefferies managed to sell, if any, before the car renter pulled the plug on the deal.

Hertz will now put out feelers for debtor-in-possession financing, but the amount of capital isn’t certain, two of the people said. The Wall Street Journal reported earlier that the Estero, Florida-based company is in talks for a bankruptcy loan. 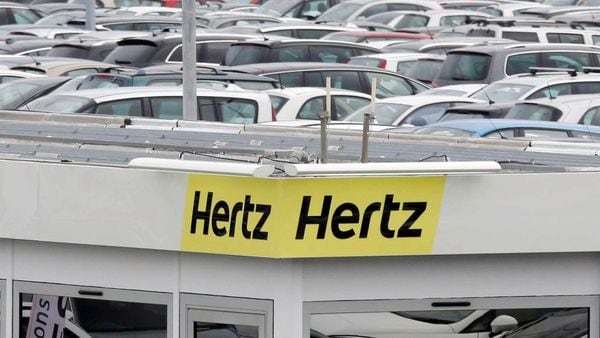 The car renter needs to figure out how it will get rid of excess autos in its fleet, the people said. The company pays between $300 million and $350 million a month to lease vehicles. Shrinking the fleet will lower its operating costs and could reduce the amount of money Hertz needs to borrow.

Earlier this month, Hertz filed a motion in bankruptcy court to revoke the lease on 144,000 of the 494,000 cars owned by holders of asset-backed securities. The company would keep the remaining cars to operate its rental business.

Advisers to the ABS holders are opposed to revoking the lease and would prefer to negotiate a way to downsize the company while preserving value for the ABS investors. The bankruptcy judge is expected to rule on that next week.