The ride-on Ford Bronco for kids comes with removable doors just like the life-size counterpart.The mini Bronco also gets in-car entertainment such as FM radio and MP3 inputs.
By : HT Auto Desk
| Updated on: 21 Oct 2021, 12:02 PM 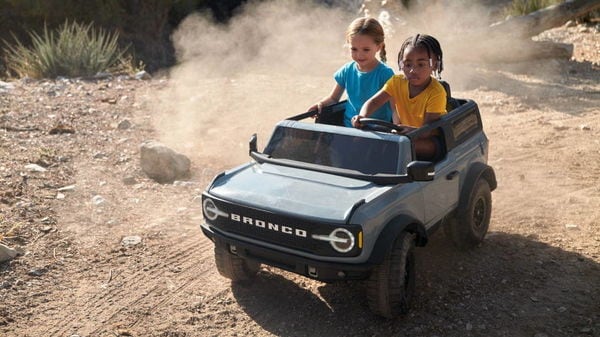 At the heart of the mini Ford Bronco is an electric battery that can be recharged by plugging it in with the One Step Direct Connect Charging System.

While adults still wait for the delivery of their Ford Bronco off-roader models, kids might enjoy a ride in their mini Bronco sooner. Made by Kid Trax and licensed from Ford, the mini Ford Bronco looks similar to its life-size counterpart with removable doors and bed cover that can result in four different looks. The roof can be removed as well.

The seats of the ride-on Bronco have been modeled after those from the full-size off-roader while the plastic wheels have rubber traction strips for better grip on all surfaces. The mini Bronco also features working LED running lights integrated on its grille, a real horn and engine sounds.

Kida can also enjoy in-car entertainment while riding in their Bronco SUV. There is an FM radio that supports a plug-in MP3 player. Other minute details on the ride-on car that gives it the feel of a real Bronco include a fifth tyre, bucket seats, functional side mirrors, among others.

At the heart of the mini Ford Bronco is an electric battery that can be recharged by plugging it in with the One Step Direct Connect Charging System including a 12-volt battery and charger. The charging point is concealed behind a faux fuel-filler door.

Further, the mini Bronco can reach upwards of 5 mph which is decent enough to entertain the budding off-roaders and also slow enough to keep the parents worry-free.

Though the launch date of the mini Bronco for kids hasn't been revealed by Kid Trax and the website says ‘coming soon’, it will likely hit the market sooner than the adults get the delivery of their life-size Broncos. This is because the waiting period for deliveries of vehicles have gone up due to the global semiconductor shortage which has wrecked havoc on automakers worldwide. Production schedules have been delayed, in turn affecting customers delivers.