GM to set up second US EV battery plant in Tennessee with LG Chem: Sources

The battery produced at this plant will be reportedly used in the Cadillac Lyriq electric crossover vehicle that GM will begin building at its nearby Spring Hill assembly plant next year.
By : Reuters
| Updated on: 15 Apr 2021, 09:42 AM 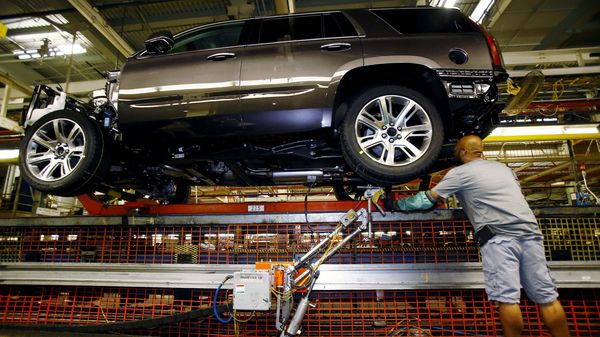 A worker at the assembly line at the General Motors Assembly Plant in Arlington, Texas, June 9, 2015. (File photo used for representational purpose).

The plant will use a different, more cost-effective battery chemistry than the one the companies will offer from the joint-venture plant they are building in Lordstown, Ohio, the sources said on Wednesday.

The battery will be for the Cadillac Lyriq electric crossover vehicle that GM will begin building at its nearby Spring Hill assembly plant next year, the sources said.

The timing of the Tennessee battery plant's opening is unclear, but there will be a period when the battery is supplied for the Lyriq by another LG facility until the Tennessee plant opens and it will not come from Lordstown, one of the sources said.

GM would not confirm the details and declined further comment, and a spokesman for LG did not have an immediate comment. A Tennessee economic development spokeswoman also declined to comment.

The No. 1 US automaker previously said it was exploring the feasibility of another US battery cell plant with LG's battery unit, LG Energy Solution, via its Ultium Cells LLC joint venture.

Sources previously told Reuters that GM and LG Chem were in advanced talks with Tennessee officials, and that the plant there would be similar in scope to the $2.3 billion Lordstown plant.

GM said in October it would invest $2 billion in Spring Hill to build EVs. The Detroit automaker said last year it was investing $27 billion in electric and autonomous vehicles over the next five years.

Sources previously said GM would need more battery plants beyond the Tennessee one to meet aggressive EV targets. GM has set a target in January of halting sales of light-duty gasoline and diesel-powered vehicles by 2035.

LG Energy said last month it planned to invest more than $4.5 billion in U.S. battery production over the next four years, including plans to build at least two new plants.

LG had been embroiled in a high-profile dispute with rival South Korean firm SK Innovation in the United States after LG alleged SK stole trade secrets, but the companies settled that and other disputes with SK agreeing to pay $1.8 billion to LG.