GM and its partner Ventec Life Systems will deliver almost half of the 30,000 ventilators that the U.S. Health and Human Services Department has ordered by the end of June.
By : Bloomberg
| Updated on: 15 Apr 2020, 09:54 AM 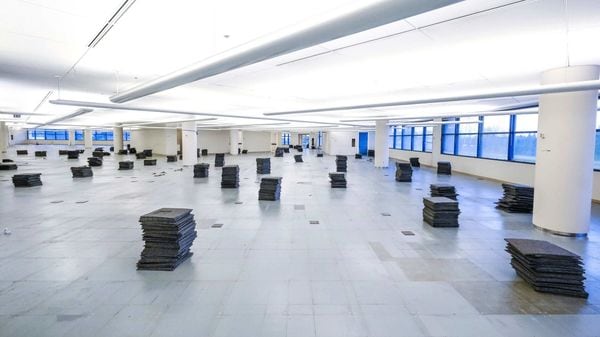 Work continues at the General Motors manufacturing facility in Kokomo, Ind., where GM and Ventec Life Systems are partnering to produce ventilators in response to the COVID-19 pandemic. GM began working with Seattle-area ventilator maker Ventec Life Systems to increase the company’s production to help during the coronavirus pandemic.

General Motors Co. started building ventilators needed for Covid-19 patients at a parts plant in Indiana, drawing praise from the Trump administration weeks after the president accused the automaker of dragging its feet.

GM and its partner Ventec Life Systems Inc. will deliver almost half of the 30,000 ventilators that the U.S. Health and Human Services Department has ordered by the end of June, according to a statement released Tuesday. The rest will be delivered by the end of August as part of a $489 million contract.

While that plant ramps up, another that is owned by Switzerland-based Hamilton Medical AG is preparing to start production with the automaker’s help. Medical ventilators are in high demand around the world as hospitals grapple with the coronavirus pandemic.

Trump criticized GM Chief Executive Officer Mary Barra in March for taking too long to start building the medical devices, but people familiar with the matter said at the time the company and Ventec were waiting on details from the administration, including how many ventilators were needed. The HHS later awarded GM the first new contract to make the machines to add to the national stockpile.

GM’s one-month sprint to turn one of its car-parts plants into a ventilator production facility prompted Peter Navarro, the White House trade adviser tapped to coordinate Defense Production Act matters, to praise the company for moving “swiftly" and “in Trump time" to manufacture the devices for delivery to hospitals in Chicago and elsewhere.

In addition to GM, Ford Motor Co. and Honda Motor Co. also have plans to produce ventilators or parts for use in the breathing machines at U.S. plants.

Hamilton, one of the world’s largest makers of ventilators, said it’s beginning U.S. manufacturing of the life-saving devices at a new factory in Reno, Nevada, with the help of GM. The plant will begin production by the end of this month, complementing the company’s existing factory in Switzerland, Hamilton said in a statement.

The Reno factory will help Hamilton satisfy a federal contract announced Monday. That $552 million deal is for 14,115 ventilators to be produced by July 3, including 850 to be delivered by May 8 and an additional 4,404 by May 22.

Hamilton said it organized a new supply chain to serve the factory to avoid diverting supplies from existing production. GM has been advising the company on how to convert a warehouse to production and quickly build a network of parts suppliers, Hamilton said.

Honda said separately on Tuesday that it would begin production of compressors used in ventilators at a facility in Marysville, Ohio. The automaker, which said it’s using a design developed by privately held Dynaflo Inc. of Reading, Pennsylvania, aims to make 10,000 compressors a month. Representatives for Dynaflo were unavailable for comment.

Ford has said previously that it is working with the the health-care unit of General Electric Co. to produce ventilators.