The XTURISMO flying bike, or hoverbike, has been developed by a Japan-based company called ALI Technologies. It can go up to a speed of 100 kmph and hover for about half an hour.
By : HT Auto Desk
| Written By : Sabyasachi Dasgupta
| Updated on: 27 Oct 2021, 12:14 PM 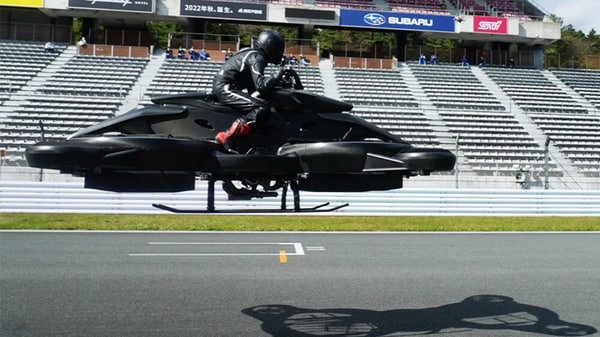 Japan-based ALI Technologies has showcased a demo of its flying motorcycle called XTURISMO. It will be offered in limited numbers.

You may have seen flying cars in action in real life, or in videos. But Japan witnessed a flying bike whooshing past them, or hovering mid-air during a demonstration this week.

ALI Technologies, a Japan-based company which has been developing flying bikes for some time, has released a demonstration flight video of the world's first practical hover bike XTURISMO Limited Edition. The hover bike was showcased during a demonstration at a racing track in Fuji.

During the demonstration, which was held on Tuesday, the XTURISMO Limited Edition flying bike was seen floating in the air with a roaring sound in front of the grandstand at the Fuji racing track. It was also seen slowly swirling in the air while drawing a figure of eight.

The XTURISMO flying bike or hoverbike operates electrically with an internal combustion engine which runs on petrol. The company aims to bring out a fully electric version of this flying bike by 2025.

The weight of the XTURISMO flying bike is about 300 kgs. The flying bike stands 3.7 metres in length, 2.4 metres wide and 1.5 metres in height. It can only seat a pilot for now.

According to the company, the flying bike has a cruising time ranging between 30 and 40 minutes. While the maximum speed of the hoverbike has not been disclosed by the company as of now, it was seen clocking around 100 kmph during the demonstration.

Daisuke Katano, President and CEO of ALI Technologies, said, "We started developing hoverbikes in 2017. It is expected that air mobility will expand in the future, but first of all, it is expected to be used in circuits, mountainous areas, at sea, and in times of disaster. I am happy to introduce it as the first step of the XTURISMO that is being done and as one of the new lifestyles.

The company said that the delivery of the first units of this limited edition flying bikes will start as early as the first half of next year.