The government had introduced FASTag, a device that employs Radio Frequency Identification (RFID) technology for making toll payments directly while the vehicle is in motion, on December 15.Many complain that either FASTag on their car is not being screened or that there are often double payments.
By : HT Auto Desk
| Updated on: 26 Dec 2019, 11:36 AM 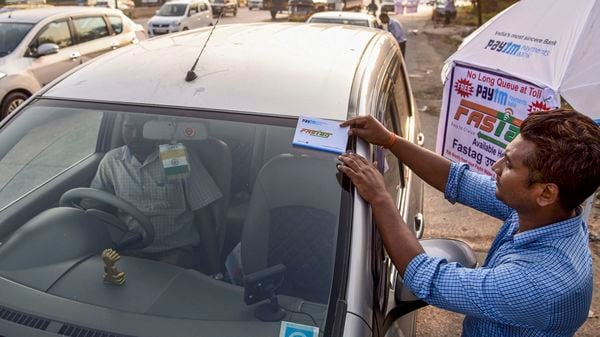 Though the Centre had made it mandatory for all the four-wheeled vehicles to have a FASTag, many still appear unaware about it while some have already made use of a Fastag have complained about discrepancies in withdrawal of money more than once on toll plazas.

The Union Minister for Road Transport Nitin Gadkari has made FASTag mandatory on all vehicles travelling through toll plazas on highways. However, a number of complaints have surfaced, ranging from additional money being charged through account, difficulties in scanning of FASTag and delay in receiving FASTags to long queues.

At Somatane Phata toll plaza on old Pune-Mumbai highway, Vivek Mohit, a passenger, had to wait for several minutes before finally moving ahead as the FASTag scanning gun wasn’t operating properly on Wednesday. “They (toll plaza staff) tried to scan the code on FASTag of my car but it wasn’t working properly. Eventually I had to pay cash. Similar thing happened with other cars too leading to delay," he said. Mohit was heading towards Mumbai with his family.

The government introduced FASTag, a device that employs Radio Frequency Identification (RFID) technology for making toll payments directly while the vehicle is in motion, on December 15. FASTag (RFID tag) is affixed on the windscreen of the vehicle and enables a customer to make toll payments directly from the account which is linked to FASTag. While 75% of all lanes have been reserved for vehicles with FASTags, 25% are for those without the tag.

However the initial problems being faced by travelers seems to suggest that FASTag is not operating smoothly, said another commuter Raju Garude. “The service is not good and many have to shell out cash."

At Urse toll plaza on Tuesday, a traveler, Ashish Bartakke, complained that he was initially told there is insufficient balance in his FASTag-linked account and was asked to pay cash. “While I paid money in cash, I checked my account and discovered money was also withdrawn from it," he said.

The government brought FASTag so that travelers can save time on highways. However people complained that time it takes hasn’t reduced much. The National Highway Authority of India (NHAI) issued a statement on its Twitter handle saying, “During this transition, NHAI is working diligently to ease out any delays at certain toll plazas due to teething issues."