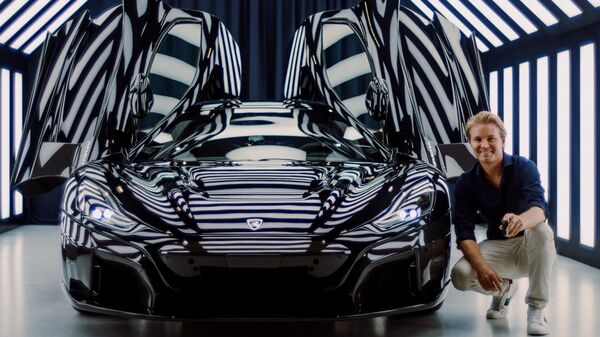 Rimac Nevera has finally entered production and the first person to take delivery of the electric hypercar is Nico Rosberg who is the 2016 F1 World Champion. Nico made a video while taking the delivery of the Nevera and uploaded it on YouTube. Along with Nico, there is Mate Rimac, founder of Rimac. Mate also signed a plaque and gave a tour of Rimac's new factory to the race car driver.

Some of the inspiration for Rosberg's Nevera comes from the Batmobile. So, most of the elements on the hypercar are finished in black. Nico opted for polished aluminium wheels with blacked-out brake calipers. The exterior is finished in a deep shade of black. The keys of the Nevera come in a separate box on which the serial number of the car is written. Rimac will be making only 150 units of Nevera.

(Also read: Are these new hypercars from Bugatti and Rimac?)

The cabin is finished in Alcantara and carbon fibre. Everything that Rimac uses is made in-house and is bespoke. There are 14 cameras throughout the vehicle that comes in handy for telemetry data and the owner can download the footage using an application. The passenger also gets a small display that shows various data depending on the driving mode that the vehicle is in.

Mate also talks briefly about the next model that Bugatti is working on. First, he says that the Chiron is one of the last vehicles with a W16 engine. He also hints about the next model by saying, “It's going in the opposite direction everybody probably expects". Nico also reveals that he has bought a Mercedes-AMG One recently.