Home Auto News Exclusive: Amazing Before To After Transformation Of A 60 Year Old Peugeot 203

Exclusive: Amazing before to after transformation of a 60-year-old Peugeot 203

A vintage car enthusiast restored a 60-year old Peugeot 203 that had been lying idle for around 15 years.Sri Lanka's Chathura Vithanage tells HT Auto that he had to restore the car's engine, transmission, wiring and interior from the ground up.
By : Deepika Agrawal
| Updated on: 07 Sep 2020, 05:12 PM 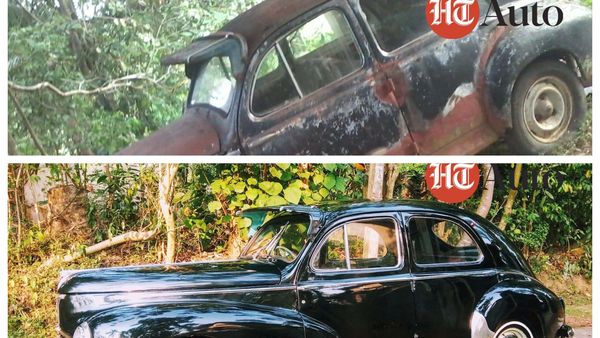 Before and after images of the restored Peugeot 203. (Photo courtesy: Facebook profile of Chathura Vithanage/ @/vithanage.chathura)

Who doesn't love a new or a premium car? But this is not something that would strike a chord with a collector. What would actually make an antiquarian's heart swell with pride is having a rare or exotic vintage car in his possession.

Even more valuable would be an old classic car that has been revived from the very scratch - its engine rebuilt, gearbox restored, paint resurrected and new panels attached by hands. And as unique and satisfying this hobby is, it can also make the car enthusiast pay through the nose.

But "classic cars need love after all" even if it means spending every free hour breathing new life into them. And this is the belief that made Sri Lanka's Chathura Vithanage restore an old Peugeot 203 from the ground up. Imported to the country more than 60 years ago in brand new condition, the Peugeot had been lying idle for about 15 years before Vithanage set his eyes on the classic. Produced between 1948 and 1960, the Peugeot 203 is a four door saloon with rear wheel drive and column-mounted gear. Its 1290cc carbureted engine produces 44 hp and power is delivered to the rear wheels through a propeller shaft. But the car that Vithanage procured from a man in his locality had lost all its glory. "60% of the car body had to be redone. I had to dismantle the engine and transmission to the tiniest parts and they had to be restored," he tells HT Auto. Wiring, new brake lines and the interior had to be done from the ground up.

An electronic and telecommunication engineer by profession, Vithanage worked on his Peugeot restoration project on weekends and after office hours on weekdays by setting up a temporary garage outside his home. He managed to use the original factory-fitted gauge of zinc coated metal sheets wherever possible on the car's body. "Existing body parts were grinded and sand blasted to remove rust and rust converting chemicals were used to prevent it from occurring in future," he explains.

After sand blasting, the bare body metals were cleaned using isopropyl alcohol and a thick coat of epoxy iron oxide primer was applied on them. This was followed by the use of a body filler, nitrocellulose primer and NC putty till Vithanage reached a level of satisfaction. The Peugeot was finally painted using a jet-black colour.

An auto restoration project is not for the faint-hearted because it requires an incredible amount of patience. Challenges were aplenty in Vithanage's one-and-a-half-year-long project. "The biggest hurdle was to restore some of the parts of the car which were not available even in France. Thus, I had to do Computer-aided design (CAD) and CNC milling for some of the precious engine parts," he explains. He even had to make some of the decorative parts and lights all by himself with reference to old photos of the car. Like the engine, the upholstery was also completely redone with the help of an expert.

The Peugeot 203 was brought back to its full glory sometime in July this year and it surely did cost an arm and leg - around 2 million LKR (approx ₹8 lakh). But the hard work and the investment seems worth it when Vithanage takes the classic car for a ride on the weekends. "The feeling I get when I drive this (car) around... cannot be turned into words or given a price tag," he says. "I cherished each moment I spent doing the restoration work on it."

The vintage car enthusiast won much praise from friends and family for his restoration project. "After seeing my revived Peugeot, many people wanted me to restore their vintage cars," he says. And now Vithanage has another project in his garage - an Austing 7 1935 that he has set his hand on.