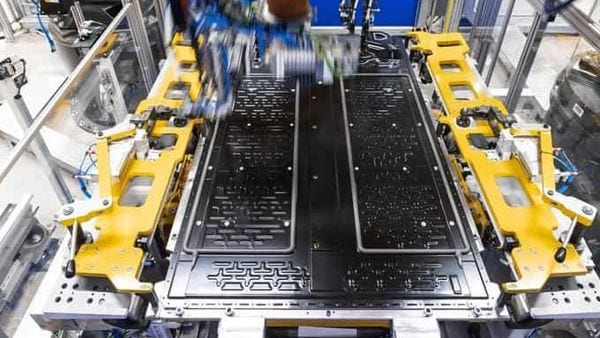 Two of the world’s largest electric-vehicle battery makers have hired top Washington insiders to hold near-daily meetings with the Biden administration in a battle that could affect the electrification plans of Ford Motor Co. and Volkswagen AG.

LG Energy Solution Co., which won the order against its rival from the US International Trade Commission for what the agency said was an “extraordinary" effort to destroy evidence in a trade secrets battle, has also brought in hired guns to influence the Biden team. Ernest Moniz, an Obama energy secretary, is advising Seoul-based LG Energy on its strategic plans, while other insiders are lobbying the administration.

“The development of the battery supply chain is going to depend on what happens with this case," Moniz said in an interview.

Meetings are being held with at least a dozen agencies, including officials at Labor, Transportation and Energy. Talks, conducted over the internet because of the Covid-19 pandemic, have focused on “climate change, electrification of vehicles, the Ford F-150 and jobs," said Browner, Bill Clinton’s Environmental Protection Agency chief who also served as a White House climate adviser when Biden was vice president.

Biden has until April 11 to intervene. Presidential vetoes, known formally as “disapprovals," of ITC import bans are rare. The last one was in 2013, when the Obama administration overturned a US import ban on some older models of Apple Inc.’s iPhones and iPads in a blow to Samsung Electronics Co.

The issue is a complicated one for Biden. The president has made the promotion of EVs a cornerstone of his $2.25 trillion infrastructure plan to bolster the economy and combat climate change. Both South Korean battery makers are building plants in the US that would employ thousands of American workers. At the same time, Biden can’t be seen as wavering on intellectual property protection considering the long-standing US dispute with China over the issue.

LG Energy, which is owned by LG Chem Ltd., filed its claim against SK Innovation in April 2019 for allegedly stealing trade secrets by poaching scores of highly knowledgeable employees. Since then both companies have spared no expense to employ the services of Washington influencers. In 2020, SK Innovation spent $650,000 on its lobbying efforts and LG spent $531,666, according to data collected by the Center for Responsive Politics.

Lobbyists for LG Energy, SK Innovation, Ford and Volkswagen have been meeting with more than a dozen agencies including Commerce, Justice and Defense departments; the EPA; the National Economic Council, and the National Security Council. US Trade Representative Katherine Tai, who’s designated to make the decision, has the task of assessing the information and deciding which arguments hold clout.

“The subject matter is right at the heart of what they’ve been working on," Spiegel said of the new administration.

LG Energy recruited consultants from Peck Madigan Jones, including Jonathon Jones, who is Delaware Senator Tom Carper’s former chief of staff; and Jay Heimbach, an ex-special assistant to former President Barack Obama, according to a federal lobbying disclosure. The firm didn’t reply to requests for comment.

Others, while not registered lobbyists, have been making public statements to influence the decision. Moniz, who’s advising LG Energy, said the import ban would force SK Innovation to settle quickly. Yates, who was fired for standing up to then-President Donald Trump and was later considered by Biden for attorney general, provided a legal opinion for SK Innovation saying Biden should reject the import ban and let the companies figure out compensation in district court.

Under the ITC order, SK Innovation will be able to import components for four years beginning now for US battery production for Ford’s EV F-150 launching next year, and for Volkswagen’s American MEB line for two years, to give the automakers time to transition to new domestic suppliers.

Ford declined to comment for this article. But company officials have said the four-year reprieve isn’t long enough. The EV F-150 is “a critical project for us," Jonathan Jennings, the company’s global commodity pricing vice president, told the Senate Finance Committee on March 16. He said that if the dispute isn’t resolved, Ford would have to look to import EV batteries from foreign suppliers for its pickups, instead of having SK Innovation manufacture them at two US-based plants being constructed in Commerce, Georgia.

The case also has drawn in state lawmakers because of the number of American jobs at stake. SK Innovation’s Georgia plants -- the first of which is due to start commercial production in early 2022 -- are expected to create 2,600 jobs, according to Bloomberg New Energy Finance. LG Energy already has a battery plant in Michigan and one planned for Ohio.

“I am hopeful these entities can reach a resolution, and am working to make sure Georgians will benefit from the jobs they were promised," Senator Raphael Warnock, a Democrat from Georgia who has been in discussions with the companies, said in a statement.

SK Innovation has warned it may pull out of the US if the government doesn’t veto the import ban. The company already has plants in Hungary and Poland, and expects to build more as demand for electric-vehicles increases.

LG Energy, in a March 10 letter to Warnock, said SK Innovation’s threats lack credibility because the company’s unlikely to spend billions of dollars to build factories and then walk away.

The Korean government has tried to get the companies together without luck. SK Innovation’s audit committee said on March 11 that it can’t accept any proposal from LG Energy that would threaten the existence or undermine the competitiveness of SK Innovation’s battery business. LG Energy said SK Innovation isn’t sincere in talks.

SK Innovation said LG Energy’s announcement of plans to invest $4.5 billion in the US by 2025 is just part of its lobbying effort to prevent Biden from vetoing the ITC ruling. LG Energy claims that it doesn’t want to put any of its rival’s clients at a disadvantage due to the ruling and plans to provide support.

If Biden doesn’t act and the import ban takes effect, SK Innovation’s next step is the courts. It’s already asked the ITC to delay implementation of the ban until it can appeal the underlying decision. Those requests are rarely granted, but are required before SK can turn to the US Court of Appeals for the Federal Circuit, which has issued stays to maintain the status quo while it considers the case.