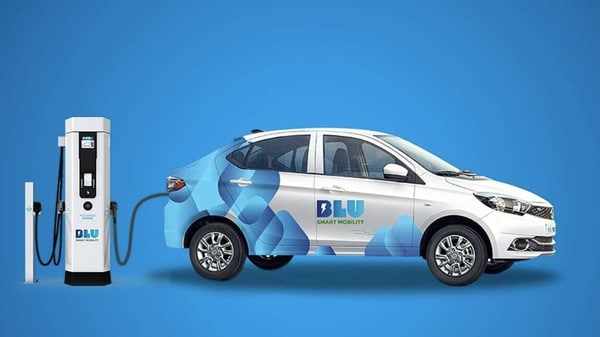 Electric taxi platform BluSmart is looking to raise $12 million in its third funding round to fund its expansion plans. (Photo courtesy: Twitter/BluSmartIndia)

Electric taxi platform BluSmart is looking at raising USD 10-12 million in its third funding round shortly to fund its geographical expansion and aggressive marketing.

The first leg of expansion will have the Delhi-NCR-only electric cab aggregator entering Mumbai, where it is already piloting the service with 25 cars.

So far, it has had two funding rounds -- USD 3 million in September 2019 and USD 7 million in August 2020 -- wherein the promoters divested over a quarter of their holding to investors such as Mayfield, the S K Munjal family, Inflection Point Ventures, Mumbai Angels and actor Deepika Padukone, among others, co-founder and chief executive Anmol Jaggi said.

"We should be able to close our third funding round in the first quarter of 2021. We are looking at raising USD 10-12 million more in equity. We've divested a little over 25 per cent for USD 10 million and we are ready to divest more," Jaggi told PTI over phone from New Delhi.

He also said the company will post operating profit in a few months but refused to share how much it earns in revenue now.

"We are on the verge of turning operationally profitable. We're sharply focussed on profitability," Jaggi said.

According to analysts, an EV cab firm like BluSmart can break even if every cab on its platform makes ₹1,800 a day.

"Business is doing pretty well with weekly growth clipping at 15 per cent or 60 per cent monthly now," he said, adding that if the present demand trend continues, November riding should be 45,000, up from 30,000 last month.

The company has 350 cars on its platform, of which 200 are owned by the government agency EESL, 80 are on lease and 70 are owned by HNIs, he said, adding the existing investors have ordered 900 more cabs from Tata Motors and M&M.

BluSmart pays 12 per cent of the riding income to the car owners and pays ₹16,000 to ₹24,000 to each driver, whose take-home depends on the distance driven and also the rider ratings. So an average driver draws the lowest while the best ones get the highest pay, he said.

It also expects around 12 per cent of the overall bus market to be electrified by then, while three-wheeler penetration should be around 75 per cent.