Sri Lanka PM says India won't be able to support his country indefinitely and that the economy is now starting at rock bottom.
By : HT Auto Desk
| Updated on: 22 Jun 2022, 04:33 PM 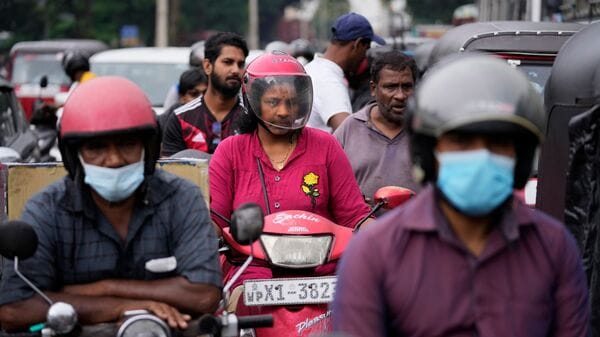 File photo of people waiting for fuel at a petrol station in Colombo, Sri Lanka.

Sri Lanka Prime Minister Ranil Wickremesinghe told his country's Parliament on Wednesday that the island nation's economy ‘has completely collapsed’ and that it won't be able to purchase imported fuel because of the massive debts owed by the petroleum corporation here. Essential items like petrol, diesel, kerosene and even food items have been in very short supply thus far but sky-high prices would mean for little if there is none left of these at all.

Wickremesinghe took over as Prime Minister of Sri Lanka a month ago and in the midst of an unprecedented economic crisis which has seen commodity costs surge to record highs. Thus far, the country has managed to steer through very choppy waters courtesy $4 billion in credit lines. But Wickremesinghe admitted on Wednesday that India won't be able to provide support indefinitely. “Currently, the Ceylon Petroleum Corporation is $700 million in debt. As a result, no country or organization in the world is willing to provide fuel to us. They are even reluctant to provide fuel for cash," he reportedly told lawmakers. “If steps had at least been taken to slow down the collapse of the economy at the beginning, we would not be facing this difficult situation today. But we lost out on this opportunity. We are now seeing signs of a possible fall to rock bottom."

Mile-long lines outside fuel stations have become a common sight in many Sri Lankan cities. Motorists often have to wait for as long as 12 hours to get a tank full of fuel. Earlier this month, a fuel-rationing system was announced while the country's armed forces were previously called in to maintain order due to sporadic incidents of violence and theft. There have also been concerns raised against possibility of adulteration.

Sri Lanka has no oil reserves of its own and its economy has mostly depended on tourism, tea and rice production. Outbreak of Covid-19 pandemic and the Russia-Ukraine war has been a double whammy for the country that has seen massive protests which led to Mahinda Rajapaksa resigning.

Fuel may well be seen as a luxury item at a time when even medicines are in short supply. The country has received pledges of up to $600 million from World Bank with officials expected to land here to discuss a rescue package.