DSK Motowheels in talks with Hyosung to locally produce bikes

Pune-based DSK Motowheels is in talks with its South Korean partner Hyosung to locally manufacture superbikes in the country.
By : PTI
| Updated on: 04 Jun 2015, 10:53 AM 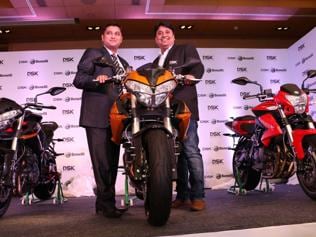 Pune-based DSK Motowheels is in talks with its South Korean partner Hyosung to locally manufacture superbikes in the country.

'We are in talks with Hyosung to locally produce bikes. Even if we are able to finalise a plan by the end of next year, it will take another 18 months to begin operations,' DSK Motowheels chairman Shirish Kulkarni told PTI.

The company currently gets bikes from Hyosung in completely knocked down (CKD) state. It assembles the bikes at its plant at Wai near Pune before dispatching them to dealers.

Elaborating on the plan, Kulkarni said: 'We have proposed to them to make India an export hub for their bikes. We are looking at 75-80 per cent of localisation as part of the local manufacturing.'

The company, which also has a collaboration with Italy's Benelli, is coming up with a new manufacturing facility at Talegaon (near Pune) at an investment of ₹ 350 crore.

'The plant would get operational in the next 1.5 years. We plan to move Hyosung operations to this new plant while the Wai plant would be utilised for Benelli bikes,' Kulkarni said.

The upcoming plant would have an installed capacity to produce 50,000 units per annum, he added.

'We also want to do it (local manufacturing ) with Benelli but it is to early to say anything about that,' Kulkarni said.

'Together, we plan to sell around 5,500 bikes this year. The imported super bikes market in India is estimated to grow to around 15,000-20,000 units during this year,' Kulkarni said.

Both Benelli and Hyosung superbikes are sold from different dealerships across the country. DSK Motowheels today opened its first Benelli dealership in the capital.

The company aims to have around 20 dealerships across the country by the end of this fiscal. It currently has 8 outlets.