The 27-strong team, including Airbus , BAE Systems , Ford and Rolls-Royce , have joined forces to ramp up production of a ventilator made by Smiths Group which supports those with complications from COVID-19.
By : Reuters
| Updated on: 30 Mar 2020, 07:52 PM 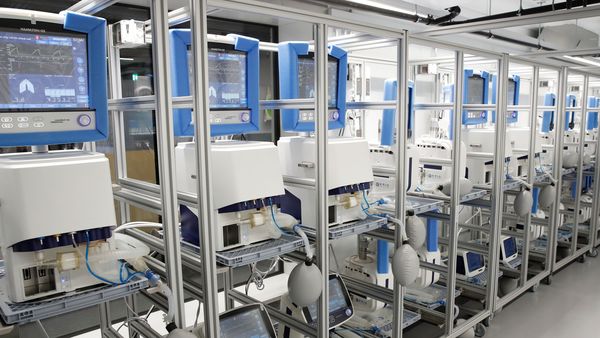 Britain has ordered 10,000 ventilators from a consortium of leading aerospace, engineering and Formula One racing companies which will start production this week in response to an urgent government call for industry to help save lives.

The 27-strong team, including Airbus , BAE Systems , Ford and Rolls-Royce , have joined forces to ramp up production of a ventilator made by Smiths Group which supports those with complications from COVID-19.

The consortium, which also includes seven Formula One teams including McLaren and Mercedes, home to World Champion Lewis Hamilton, said they had pulled staff off existing projects to meet the national need.

Some 1,228 people have died from coronavirus in the United Kingdom and a senior health official said on Saturday the country would be doing well if it manages to keep the death toll below 20,000.

"This consortium brings together some of the most innovative companies in the world," Dick Elsy, the head of the consortium, said in a statement. "I am confident this consortium has the skills and tools to make a difference and save lives."

The United Kingdom, which initially only had 5,000 ventilators available in its National Health Service, has been trying to secure additional supplies after realising it needed 30,000 to cope with the peak of the outbreak.

Prime Minister Boris Johnson, who is now in isolation in Downing Street after testing positive for coronavirus, made an emergency appeal earlier this month for manufacturers to retool their production lines and start making specialist health equipment including ventilators.

Britain now has about 8,000 ventilators, with another 8,000 on order from international manufacturers that are due in coming weeks. Last week it placed an order for a newly-designed model from the vacuum cleaner company Dyson that will need to be approved by the health regulator.

Separately on Monday a second team including Mercedes Formula One said it had developed in less than a week a new version of a breathing aid that can help coronavirus patients which is now being trialled in hospitals.

The consortium, which was asked in mid-March to come up with a way to retool factories that produce everything from aircraft engines to the world's fastest racing cars, did not say when the ventilators would be ready for use in hospitals.

Reuters reported last week that the consortium was ready to start building ventilators and was waiting for the green light from government to start production.

Smiths Group said the team would ramp up production of its Smiths Medical paraPAC plus, a lightweight and portable ventilator that helps take the strain from the lungs. The device is fully certified and used by medical professionals within Britain and overseas.

The company is also working with governments and manufacturing teams around the world.

"It is inspiring to work with the very best UK Technology and Engineering companies with a spirit of grit and determination to deliver these life saving devices to our incredible health service," Chief Executive Andrew Reynolds Smith said.

The consortium is also building another ventilator from existing producer Penlon.

Nadhim Zahawi, the minister for business and industry, said more than 3,000 companies had answered the prime minister's call for ventilator production.

"Their help will be vital as we make our way through this turbulent period."