Two sisters from Mumbai's Ghatkopar have come up with a unique solution to curb air pollution and conserve fuel with a blue traffic light which will blink and force the drivers to switch off their engine.
By :
| Updated on: 19 Nov 2019, 07:13 PM 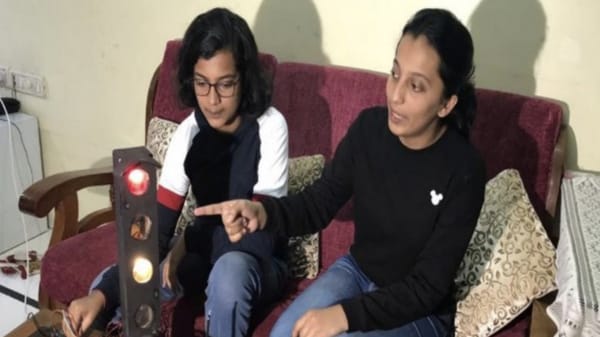 Ghatkopar (Maharashtra) [India], Nov 19 (ANI): Two sisters from Mumbai's Ghatkopar have come up with a unique solution to curb air pollution and conserve fuel with a blue traffic light which will blink and force the drivers to switch off their engine.

Shivani Khot and her sister Esha Khot have come up with a solution to curb air pollution and conserve fuel. A blue traffic light, which will blink 10 seconds after the red light comes on and stop blinking 10 seconds before the red light goes off. During this period the drivers will have to switch off their engine.

Ghatkopar residents Shivani Khot, 20, and her sister, Esha, 15, have come up with a unique solution to curb air pollution and conserve fuel – a blue traffic light, which will blink 10 seconds to indicate SWITCH OFF the Engine @ANI @BSKoshyari @CMOMaharashtra pic.twitter.com/tOYbsxEZdR

Speaking to ANI, Shivani Khot said, "Air pollution is a hot topic and very hazardous to life. We have seen many deaths due to air pollution. Recently the situation in the country's capital is worst due to pollution. This concept of blue light will help to curb the pollution and it will cost around eight thousand Rupees for installation per signal but important is that we are losing a lot every day due to this pollution which happens due to the burning of fuel."

"We personally suggest people switch off engines when the red light is on and people have reacted positively to this concept till now. It is really very cheap compared to the price we are wasting in the fuel and car burn," said Esha Khot

"We have introduced a new light that is of blue colour which will indicate you to switch off the engines. We have three lights on the signal--red, green and yellow and we have become accustomed to that so gradually we will be able to condition ourselves similarly for this blue light," she added.

Shivani further added that we have done a survey at Jijamata traffic junction here at Ghatkopar where we calculated that 156 litres of fuel is lost every day and 371kg of carbon dioxide was being emitted per day in every signal. If we see the bigger impact there was a survey done in Delhi that it was found that rupees 250 crore is wasted in Delhi alone, so you can see that the impact is big.

"We are happy that people are coming forward to solve such problems with new ideas. This is a good idea but we need to coordinate this with the traffic department because the traffic methodology is different now," Maharashtra Pollution Control Board (MPCB) Chairman Sudhir Srivastav told ANI.