Automakers are investing in EVs like they mean it

On an annualized basis, the investment plans of Volkswagen, Stellantis, and GM would be more than half of their R&D and capex last year.
By : Bloomberg
| Updated on: 05 Aug 2021, 06:45 PM 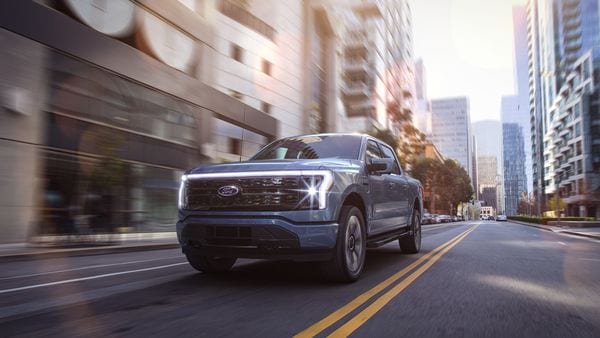 Ford Motor has turned its best-selling vehicle into a fully electric model with the F-150 Lightning. This is its first electric pickup truck.

Later today, the Biden administration will announce new automobile emissions standards and targets for electric vehicle sales. It won’t be speaking alone — Detroit will be there, too, with automakers expected to commit to an electric vehicle target of at least 40% of total sales by the end of the decade.

A 40% target sounds bold, but it’s actually in line with what major automakers have already pledged. Ford Motor Co. already has a 40% target, as does Stellantis NV, the auto giant formed earlier this year from the merger of Fiat Chrysler Automobiles and PSA Group. Volkswagen AG goes the furthest — it expects half its U.S. sales and 70% of its European sales to be electric by 2030.

Sales targets don’t show up on the balance sheet, however. Investment does.

BloombergNEF closely tracks automakers’ investment in electrification, as well as in digital initiatives such as smart vehicles and autonomous driving programs. The five biggest U.S. and European automakers have all committed tens of billions of dollars to EVs and digital initiatives.

When auto companies say they’ll “invest" or “spend," they’re talking about two things: R&D and capex. Research and development is the front-end of investment, so to speak — it’s the experimentation and iteration of exploring new technologies and shaping new designs. Capital expenditure is the back-end — the tools and equipment needed to build new designs at scale.

Based on their sales pledges and capex expenditures, it’s fair to say that automakers are quite committed to EVs. But that commitment is even stronger when you consider the capex figures not as absolute (big) numbers, but as shares of their total investment.

On an annualized basis, the investment plans of Volkswagen, Stellantis, and GM would be more than half of their R&D and capex last year. Ford isn’t far behind; Mercedes-Benz trails slightly despite its aggressive EV sales target.

Capital expenditure is so important because it’s the culmination of a manufacturer’s multi-year exploration of the future. It begins in the corporate strategy suite, flows into the research wing, and winds upin the commitment of tens of billions of dollars in equipment. Strategies are flexible, as is research, but capital equipment — purchased and configured for specific designs and models — is relatively rigid — automaker capex for electric vehicles is a promise that can’t be easily undone or repurposed.Sales targets are a signal of what a company thinks. Research and development is a vector, a direction the company is exploring. Capital expenditure is more than that. Capex is destiny.