With regard to road accidents, the minister said there was a slight reduction in the number of accidents that occur on roads by 4 to 5% now.
By : Press Trust of India, Hyderabad
| Updated on: 24 Sep 2017, 09:23 PM 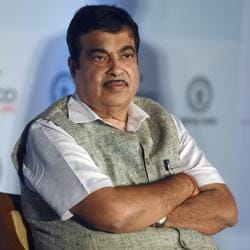 Union minister for road transport, highways and shipping Nitin Gadkari on Sunday said the government was concerned about vehicular pollution and asked the automobile industry to venture into electric vehicles segment.

Gadkari was in Hyderabad to participate in ISB Leadership Summit organised by the Indian School of Business.

"We are not against any automobile industry. We export about ₹1.5 lakh crore (worth of automobiles). It (the auto industry) has got highest employment potential. I told them (auto makers) to continue exports."

"But pollution is a big concern. You give priority to indigenous technology. Now India is coal and power surplus country. It is very cheap. People will also be benefitted. Give priority to this. You venture into public transportation using electricity," Gadkari said replying to query on the government's plan to make the country an all electric car market by 2030.

He said the ministry was earlier laying 2 km of roads per day on an average and today the number has spiralled to 28 km.

With regard to road accidents, the minister said there was a slight reduction in the number of accidents that occur on roads by 4 to 5% now.

"When I took over on average about 5 lakh people used to die in road accidents every year. We have identified over 780 black spots on the Indian roads. We have issued orders to set up district level committees to monitor road accidents," Gadkari said, adding, the target is to reduce the accidents by 50%.

Without elaborating much on the way the district level committee will function, the minister said, it will be headed by a local MP and the collector will be its secretary and MLAs as members.

The committee will go to the spot and verify whenever and wherever there is an accident, he said.

Gadkari said India's agricultural growth should be in the range of 20 per cent so that job creation in rural areas will be increased which will discourage migration to urban regions.