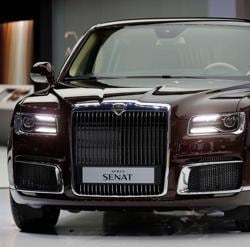 The Aurus Senat is presented at the 2018 Moscow International Auto Salon in Moscow, Russia.

A new state-owned Russian carmaker launched Wednesday a Soviet-influenced luxury vehicle it hopes will lure the domestic super rich away from brands such as Rolls-Royce.

Putin at his inauguration for a fourth presidential term this May rode to the Kremlin in a boxy black Aurus limousine with a huge front grill.

This marked a return to the Soviet-era practice of leaders riding in domestically made ceremonial cars. In previous years, Putin has opted for a Mercedes instead.

The new designs are influenced by Soviet-era cars produced only for top officials, the carmakers said, and the Kremlin has already received a number of the vehicles.

Chief designer Vadim Pereverzev told AFP that market research among Russians showed "there is demand for a high-tech quality product made in our country, in particular for a car of such a class."

"Consumers of such cars, you could say they are tired of Rolls-Royces, Mercedes and Maybachs," said Pereverzev, who has worked with Italian brands including Fiat.

Pereverzev acknowledged design influences for the Aurus Limousine included a model made for Soviet dictator Joseph Stalin, the ZIS, which also featured a huge chrome grille.

"I'd say that it was more that era that inspired our designers -- an era of great achievements by our state when cars like the ZIS appeared," Pereverzev said.

The cars were developed by a state enterprise called NAMI, which owns a controlling stake in the Aurus brand, in conjunction with Russian automotive group Sollers.

Russian state funding for the project came to around 12 billion rubles ($176 million).

There is also an investor from United Arab Emirates, Tawazun, which invested 110 million euros, Manturov said.

The brand is hoping to attract both wealthy Russians and international customers who currently opt for Western-made models.

"We will not sell this vehicle only in Russia, we will sell it abroad," the CEO of the Aurus brand, Franz Gerhard Hilgert, said in his presentation.

The price of the model will be "somewhere in between Mercedes and Rolls-Royce", said Hilgert, who used to represent Daimler Chrysler in Russia.