Volkswagen CEO Herbert Diess will answer a number of important questions from the general public about Volkswagen and the future of mobility or the transportation industry on Reddit.
By : HT Auto Desk
| Updated on: 15 Feb 2022, 09:50 AM 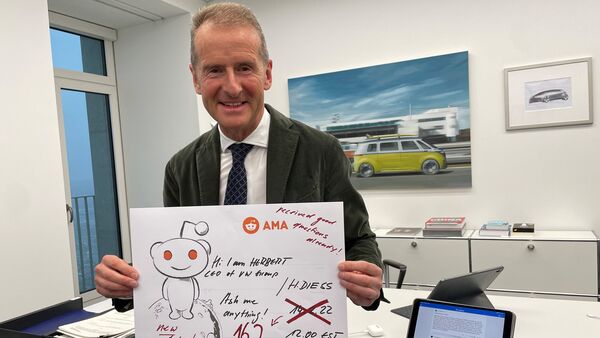 Volkswagen CEO Herbert Diess has posted an image of him holding an announcement placard on the Reddit post.

Volkswagen CEO Herbert Diess has been trying to grow his presence over social media over the past couple of years and this time, the chief has taken to Reddit to announce an ‘Ask Me Anything’ session on February 16 at 22:30 IST. Diess has posted an image of him holding an announcement placard on his Reddit post.

In the said session, Diess will answer a number of important questions from the general public about Volkswagen and the future of mobility or the transportation industry. In his Reddit post, he wrote, “We will be able to take our hands off the steering wheel, so the car will become a time machine, giving us an additional few hours a week that we can use for communication, friends, leisure, playing, reading… This is undoubtedly liberating for many."

While there is still time for the session, a number of important questions have already been posed to Diess, with many expecting him to answer personally. One of the questions relate to LiDAR where a Redditor has asked Diess what he and Volkswagen Group think of LiDAR system and what they look for in a third party to provide this tech.

This question is relevant as when various car manufacturers have announced partnerships with LiDAR companies for their driver-assistance systems, Volkswagen has mostly remained quiet on the matter. However, it is a known fact that the company is working on autonomous commercial vehicles with Argo AI and will indeed use the technology.

Some other questions relate to ID.4 electric car and the lack of over-the-air updates. Another question starts by suggesting that some of VW’s ID. models are behind in the competition in terms of performance and charging speeds, despite VW Group brand Porsche offering exceptional performance and charging speeds with the Taycan. The Redditor then asks that wether similar technology from the Taycan could be used on VW’s MEB platform.