Attempts to wrest Zoox or its talent away from Amazon started before the two even reached a definitive agreement.
By : Reuters
| Updated on: 10 Jul 2020, 07:59 AM 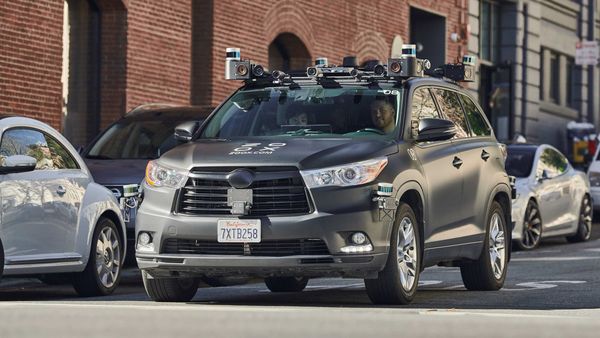 A vehicle belonging to California-based self-driving startup Zoox seen driving along a street.

Amazon.com Inc plans to create at least $100 million in stock awards to retain the 900-plus employees of Zoox, the self-driving car startup it offered to buy last month, and can walk away from the deal if large numbers of them turn down job offers from the technology giant.

Amazon, which is aggressively expanding into self-driving technology, announced June 26 it had agreed to acquire the Silicon Valley company, which was founded on an ambitious effort to design a fully autonomous vehicle from scratch rather than retrofitting existing cars for self-driving.

Amazon will pay $1.3 billion in cash for the takeover, which the parties hope to close by September, according to deal documents seen by Reuters.

Zoox had been valued at $3.2 billion in 2018, according to data from PitchBook. The Amazon deal documents show Zoox was burning more than $30 million each month in early 2020 and projected it would run out of cash by July. Amazon had the option to lend Zoox $30 million on signing the agreement in June, with the option for further loans before the deal closes.

Amazon and Zoox did not immediately respond to requests for comment.

Attempts to wrest Zoox or its talent away from Amazon started before the two even reached a definitive agreement.

After Zoox signed an exclusive agreement to negotiate with Amazon but before they reached a deal, a third party stepped in to offer $1.05 billion, according to the deal documents.

Zoox did not respond to the offer. Reuters reported June 4 that the founder of Cruise approached Zoox engineers with job offers.

The Amazon-Zoox deal documents describe two lists of "key employees." All on the first list must take Amazon jobs for the deal to close, and at least 19 from the second list must stay. Amazon plans to offer jobs to three schedules of other Zoox employees, requiring that 90% of the first two and 88% of the third accept jobs to close the deal.

Reuters could not determine which employees were specified.

Zoox co-founder Jesse Levinson will receive 40% of his deal compensation over three years rather than at the closing. Levinson owns 49 million of the 131.4 million common shares of Zoox, a roughly 37% stake. Zoox Chief Executive Aicha Evans got a $3.4 million cash bonus, according to the documents.

The deal rewards Zoox "company service providers" who had joined by May 18 with a $125 million cash "transaction bonus pool" paid out in proportion to their shares. Amazon provided 30% of the funding for the pool, on top of the $100 million pool of Amazon restricted stock units it will create for Zoox employees who stay with Amazon after the deal, the documents show.

The rewards for current Zoox employees who stay on - even those who joined recently - far outstrip those of longtime former employees with only common shares or those employees who leave before the close. Common shares are expected to be valued between 69 cents and 76 cents each after the deal closes, according to the documents.