After chip woes, auto recovery may soon be in China's hands

Though cars aren’t a major driver of chip demand, the auto industry is increasingly reliant on these components. Around 40% of a vehicle’s cost comes from electronics.Robert Bosch GmbH and Aptiv Plc have plants in China dedicated to installing chips into motherboards and modules.
By : Bloomberg
| Updated on: 25 Jan 2021, 13:19 PM

File photo: A semiconductor chip and board designed to speed up servers that cater to a growing number of mobile devices

As the global car industry ramps up pressure on Taiwan to produce more semiconductors, the world would do well to look at the next step in the supply chain, where Chinese factories have the task of assembling those auto electronics they so desperately need.

It’s a little simplistic to blame the industry’s woes on an inability by some suppliers to make enough chips that go into vehicles. As we wrote last week, poor planning and miscalculations by automakers meant they didn’t adequately prepare for their own needs. Blaming low visibility on the sudden resurgence of demand is hardly an excuse.

In reality, there’s plenty of chip capacity. Taiwan Semiconductor Manufacturing Co., the world’s largest supplier, garnered just 3% of its revenue last year from automotive components. What’s more, sales from this sector fell 7%. By contrast, smartphone, machine learning and artificial intelligence companies were putting in record orders. At lagging rival Semiconductor Manufacturing International Co., the “other" category, which includes auto as well as industrial uses, contributes less than 20% of sales. Carmakers had significantly scaled back orders over the last couple of years, with revenue from the sector(1) dropping between 2018 and 2019.

And even though cars aren’t a major driver of chip demand, the auto industry is increasingly reliant on these components. Around 40% of a vehicle’s cost comes from electronics, according to consultancy firm Deloitte, with the average car set to carry around $600 of semiconductors by next year.

In other words, while automakers are desperate for chips, it won’t take much for producers to allocate more capacity to them, especially in the first quarter, which is low season for smartphones and many other electronics. TSMC’s Chief Executive Officer C.C. Wei said last week that boosting output of auto chips is its top priority. 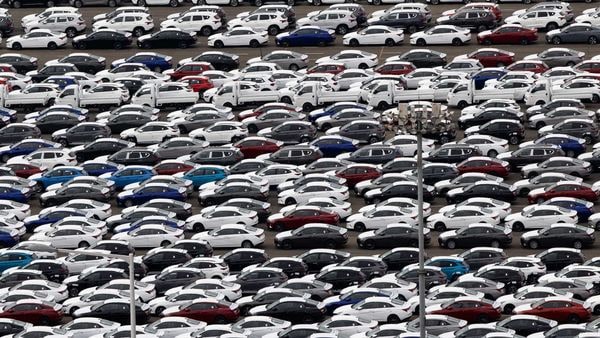 But it takes time. Making a semiconductor requires eight weeks or more, and that assumes the design is ready to go. Auto-related chips go through strict safety protocols and a relatively long supply chain. Procuring new equipment isn’t fast, either, given that a lot of automotive components are made with older technology that has slowed in output in recent years. Gear for packaging and testing takes four weeks, while that for production may drag out to two quarters, according to Goldman Sachs Group Inc. analysts. There’s also the overhead of switching from one product to another. More advanced chips can take even longer.

Then, it’s over to the intermediaries that build auto-electronics devices. This is where the car industry should turn its attention.

Much of this assembly happens in China and is largely concentrated within a handful of companies. Foreign parts makers like Robert Bosch GmbH and Aptiv Plc have plants in China dedicated to installing chips into motherboards and modules that are then shipped to the auto assembly line. Local companies are also boosting capacity, with Zhixin Semiconductor Co., backed by Dongfeng Motor Group Co. and state-owned CRRC Corp., planning to open a new factory by April.

As more semiconductors come out of the fabs, these Chinese assemblers will start to get busy — just as Lunar Near Year approaches. While this annual holiday would usually see production slow, travel has been restricted as China tries to contain smaller outbreaks of the coronavirus. This means that many migrant works will stay put and industrial activity is likely to hum along right through the festive season.

To be sure, the worst power outages in a decade threaten China's ability to keep up, as do persistent trade tensions including a ban on Australian coal used in electricity generation. Automakers may point to a shortage of chips as a their main bottleneck, but the next link in the supply chain will determine how quickly they recover.

(1) Semiconductor revenue from the auto end-market rose 8% between 2014 and 2019 on a compounded annual basis and totaled $50 billion in 2019, according to Goldman Sachs Group Inc., citing the Semiconductor Industry Association.

Delhi govt gets over 2,000 complaints in two days of old vehicles parked in city