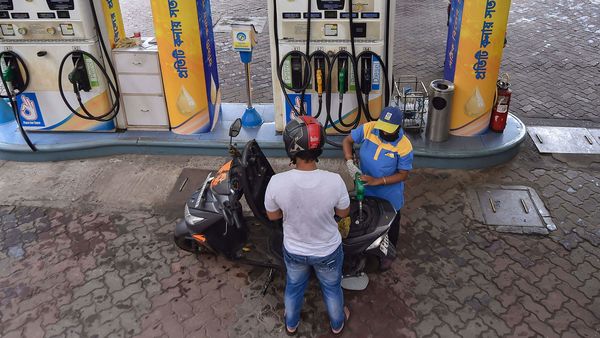 File photo of a petrol pump in Kolkata during Covid-19 lockdown days.

Kolkata Police has decided to re-impose the "no helmet no petrol" rule forbidding petrol pumps from selling fuel to motorcyclists without helmets, a senior officer said.

The "no helmet no petrol" rule would start from December 8 and will continue for 60 days, the officer said.

"It has been observed that several instances of two wheeler riders riding without helmet as well as carrying pillion riders without helmet have been reported and occurrences of such infringement of rules have increased manifold", Kolkata Police Commissioner Anuj Sharma said in the order issued on Friday.

It said that "In spite of several prosecutions in such cases being drawn up by the law enforcement agency, the apprehension and possibility of untoward incidents/ accidents arising out of riding two wheelers without helmet always remains. In order to ensure better road discipline and deter such violators of traffic laws, stringent actions need to be taken in accordance with law".

"No Helmet No Petrol shall be enforced within the jurisdiction of Kolkata Police to the effect that no petrol pump shall henceforth sell petrol to any such two wheeler rider who arrives at the petrol pump riding two-wheeler without wearing helmet as well as carries pillion rider without helmet in contravention of provisions as enumerated under relevant sections of the Motor Vehicles Act", the order read.

In July 2016, the city police, following Chief Minister Mamata Banerjee expressing her displeasure over motorcyclists not wearing helmets, had imposed similar "no helmet no petrol" rule forbidding petrol pumps from selling fuel to motorcyclists without helmets.