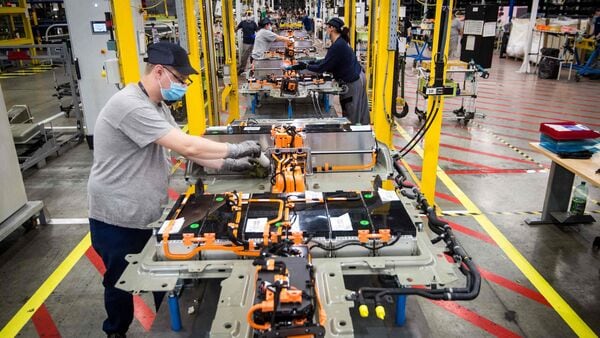 Representational file image of a worker in a car factory.

A planned Volvo factory will be a milestone for Slovakia by propelling the nation’s world-leading car industry into the realm of electric vehicles, Economy Minister Richard Sulik said.

Volvo announced last week it will invest 1.2 billion euros ($1.3 billion) in a new site to produce 250,000 electric cars a year from 2026, further boosting output of the nation that pumps out more automobiles per capita than anywhere else in the world.

The plant, which the government estimates will boost economic output by 1.3% a year and create 12,000 direct and indirect jobs, will also help diversify an industry that is mostly focused on combustion-engine vehicles. With economists warning that European Union efforts to phase out the sale of fossil-fuel burning cars by next decade, Volvo’s investment will help reorient suppliers that will help start shifting the industry toward electric.

“We view the investment by Volvo Cars positively mainly because the plant plans to produce exclusively electric cars," Sulik said Friday in emailed answers to questions from Bloomberg. “Volvo will therefore tie up more subcontractors necessary for the production of electric cars."

The EU nation of 5 million people now produces about 1 million vehicles a year at factories owned by Volkswagen AG, Kia Corp, Stellantis NV, and Jaguar Land Rover, making up more than a 10th of the economy and more than 40% of exports.

Still, it has lagged behind its central European peers in attracting investments to technology linked to electric vehicles.