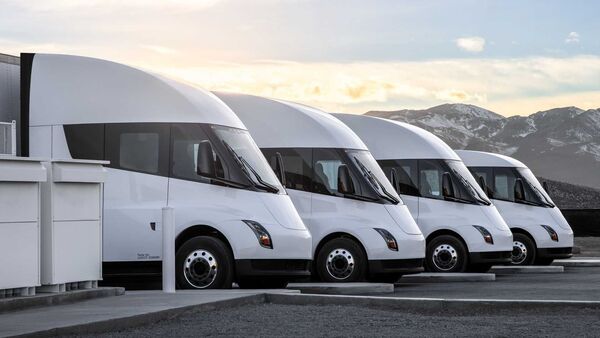 The US electric vehicle manufacturer is tight-lipped about the progress of the Tesla Semi.

Tesla Semi is one of the most awaited products from the US-based electric vehicle major. The pure electric semi-truck is yet to enter production despite the hype, but the latest patent approval to Tesla suggests that it will come with a technology that inflates tyres automatically, reports Electrek.

Christened as Automatic Tyre Inflation System (ATIS), the technology appears to be implemented in the future fully electric Tesla Semi. This technology will allow the electric semi truck's tyre pressure to adjust in real-time. This is not the first time, Tesla filed for a similar patent, as back in 2018, the auto company applied for a patent of automatic tyre inflation system. However, the latest one comes addressing the shortcomings of the previous one.

In the latest patent, Tesla has made it clear that the earlier system from the previous patent had some shortcomings, which were required to be addressed.

As Electrek reports, the prior solutions air was fed through hollow drive axles t a fitting located on the end. The fitting was then coupled to the air inlets of the tyres. To couple the air into the hollow drive axles, a rotating fitting coupled air from air storage to the inside of the hollow axles. This fitting was subject to leakage, which would result in a failure for the entire system. This eventually caused failure for the ATIS. However, the new patent comes addressing the problem.

The new system comes with a controller, valves controlled by the controller, valves with air supply inlet and a plurality of air outlets as well. The automaker has explained in its patent filing that the new system comes significantly reducing the contamination in the ATIS air stream. The automaker also said that the reduction in potential contaminants will extend the system's longevity and make its maintenance intervals less frequent.