Ola Electric CEO Bhavish Aggarwal showcased the UK facility of the EV maker, which will be the design hub for the brand's upcoming models.
By : HT Auto Desk
| Updated on: 04 Jul 2022, 09:10 AM 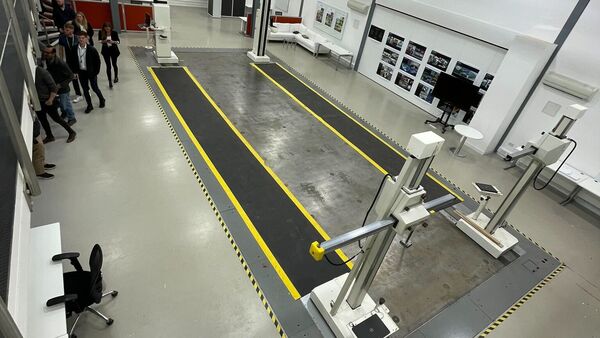 A glimpse of the Ola Electric's UK facility which will be the EV maker's global design hub. (Photo courtesy: Twitter/@bhash)

Ola Electric has shared the first glimpse of its upcoming new facility in the United Kingdom. The facility, called Ola Futurefoundry, will be Ola Electric's global design studio where it will develop new electric two-wheelers as well as four-wheelers in coming days. The facility, which is located in Coventry, will also act as the EV maker's R&D centre to work on battery cell technology. Ola Electric CEO Bhavish Aggarwal, who is currently in UK, shared the latest updates from the Ola Futurefoundry, saying it is nearing completion to start work.

“With our UK design team in the studio! Exciting new products coming up soon," wrote Aggarwal on Twitter, while sharing the first glimpse at Ola Electric's global design hub.

Ola Electric said it plans to invest £100 million (roughly converted to ₹750 crore) over five years. The company has already roped in Wayne Burgess, former head of design at Jaguar, as the Vice President of the EV maker's vehicle design team. The facility will also employ around 200 designers and engineers to work on its upcoming products, like the new electric car. The Futurefoundry will supplement and collaborate with Ola Electric's team back in India to deliver new EVs across two-wheeler, four-wheeler and other segments in coming days.

Recently, Ola Electric shared the first teaser images of its upcoming electric car. The new EV is likely to be unveiled on August 15, the same day when Ola Electric launched its first product, the S1 Pro electric scooter, in 2021. The teaser video, released by Ola Electric, shows that the new electric four-wheeler will get sleek LED DRLs and its futuristic exterior design.

Aggarwal had earlier mentioned about the company looking to foray into the electric four-wheeler segment. Earlier in May, it was reported that the EV maker is looking for a base to set up its electric four-wheeler and battery cells plant. It will require around 1,000 acres of land for the EV four-wheeler factory, which is almost double that of the FutureFactory where it currently builds S1 Pro electric scooters.