For Tesla, strong demand an opportunity but production problems a challenge

Tesla CEO Elon Musk has dismissed notions that current global economic situation is not conducive to big-ticket purchases like cars. He instead sees demand remaining robust.
By : HT Auto Desk
| Updated on: 21 Jul 2022, 09:44 AM 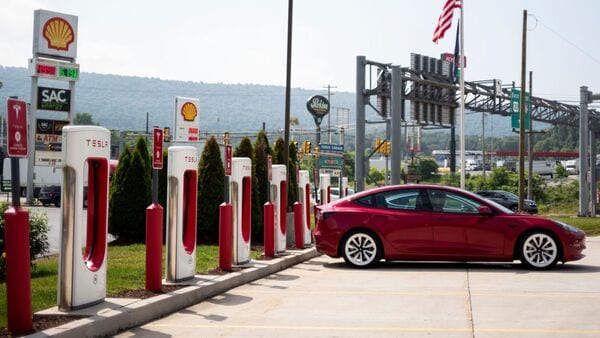 File photo: A Tesla vehicle next to a charging station at a Sheetz gas station in Breezewood, Pennsylvania.

Tesla recently reported an adjusted income of $2.6 billion in the second quarter of the year, a figure that is noticeably less than the $3.7 billion earned in the first three months. At $16.9 billion, revenue was also down by 10 per cent between the two quarters although it was up by 42 per cent when compared to the same period of last year. Tesla CEO Elon Musk remains confident of the demand sustaining itself and possibly growing even though the lockdown restrictions in China earlier this year is being largely seen as having had an impact on Q2 performance for the American EV maker.

Tesla has had a determined approach towards increasing its production and delivery capabilities across the world but the going has not been smooth in recent times of pandemic. Chief Financial Officer Zachary Kirkhorn has said that a 50 per cent growth in deliveries this year 'is still possible with strong execution.'

Tesla and CEO Elon Musk continue to highlight that there is a continuing demand for EVs across the world and therefore, the challenge isn't to up this demand but to cater to it. Musk has already beaten back notions that the rising inflation in many countries is hurting buyer sentiments. Car prices too have increased regardless of powertrain. Tesla Model Y, for instance, has seen an upward price revision by more than 30 per cent since early parts of 2021 and now costs $66,000 in  the US.

For Musk though, it is all about putting the production processes into an even faster lane. After all, Tesla continues to have the extremely ambitious target of selling 20 million EVs each year by the early 2030s.

For now though, Q2 may have been a rather challenging time period even if the Shanghai facility managed to hit record production numbers in June. The newer facilities in Berlin and in Texas are looking at hitting 20,000 unit-mark each month by the end of this year. And if Musk's prediction of inflation easing by end 2022 does come true, it could be an open stretch for the world's largest EV maker to speed ahead on.