EarthtronEV has installed the first four EV charging stations in Delhi-NCR with 50 charging points each.
By : HT Auto Desk
| Updated on: 07 Apr 2022, 04:22 PM 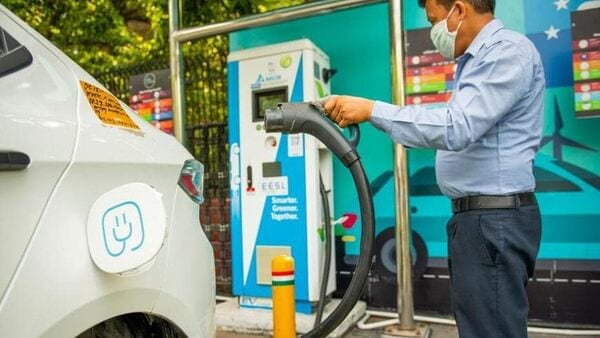 Representational image of a charging station for electric vehicles in Delhi NCR region.

EarthtronEV recently announced that it has launched four new EV charging stations in Delhi-NCR. The EV infra start up has installed the first four EV charging stations on the highways connecting Delhi-NCR such as Delhi-Agra, Delhi-Jaipur, Delhi-Chandigarh and Delhi-Haridwar. The company added that each of these stations comprise capacity of 50 charging points each.

“There are many EV stations in major cities, primarily for cabs and commercial vehicles as private EV owners usually charge at home. However, they shy away from intercity travel due to a lack of proper charging network on highways. We aim to bridge this gap by covering all major highways in Delhi NCR. Approvals for Delhi Agra Highway have already been received from the concerned authority. Others are in process for approvals," Ashish Deswal, Founder, EarthtronEV, said in a statement.

The company added that its new charging stations will be equipped with various facilities and offer a super-fast charging service electrifying highways and interconnecting tier-1, tier-2 and tier-3 cities.

Meanwhile, electric vehicles sales is rocketing to new heights in India and in year 2021, the figures managed to triples to 14,800 units. For February 2022, the country saw electric passenger vehicles sales grow 296% to 2,352 units, according to the Federation of Automobile Dealers Associations (FADA) report.