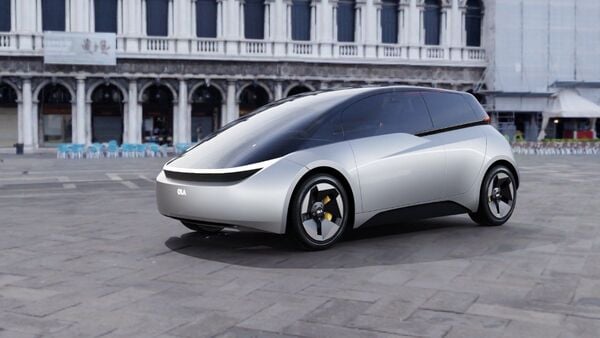 After entering the electric scooter segment, OIa is planning to launch an electric car.

Ola CEO Bhavish Aggarwal just teased the upcoming Ola electric car on Twitter. The EV looks like a design concept for the upcoming Ola e-car that would be a stylish battery-electric hatchback. The latest teaser image comes after Ola CEO yesterday hinted that an electric car from the ride-hailing startup turned EV manufacturer is in offing.

Responding to a tweet, Aggarwal wrote on Monday that the person who purchased a Tata Nexon EV and an Ola S1 e-scooter would next buy an Ola electric car. “Next car replacement should be the Ola electric car," wrote Bhavish Aggarwal in his Tweet.

Can you guys keep a secret? 🤫🤫 pic.twitter.com/8I9NMe2eLJ

The ride-hailing service aggregator startup that has established itself in the Indian market for several years now, has entered the EV manufacturing business last year. It launched Ola S1 and S1 Pro electric scooters, which are made in India and have received a pretty good response.

“The current Futurefactory is for two-wheelers. Our four-wheelers will likely need a separate Futurefactory. Today’s tweet is more along the lines of a teaser of some four-wheeler design work currently underway," the official further added.

Next car replacement should be the Ola electric car 😉👍🏼 https://t.co/ZPk1FOdzHW

Speaking about the Ola electric car Bhavish Aggarwal previously also said that Ola's first electric car will be out in 2023 and the project would be backed by Japan's Softbank Group. He further emphasised that the company aims to make India a global electric vehicle hub. However, Ola is yet to reveal any further detail about its upcoming electric car.

The Ola electric car is likely to be built at the EV manufacturer's factory in Tamil Nadu. This manufacturing facility is currently claimed as the world's largest plant for electric scooters.

Demands for electric vehicles have been increasing fast in India. The country is expected to witness major growth in electric vehicles owing to the high price of petrol and diesel, lower cost of ownership for EVs compared to ICE vehicles, tightening emission restrictions and growing concern around vehicular emission that contributes to global warming.

Meanwhile, Ola has recently entered the business of selling pre-owned cars in India under its new wing Ola Cars. This vertical sells used cars in several cities across India.